People? Pfft. Horde troopers were more like people, legs, arms, personalities. In the She-Ra and He-Man movie he smashed and wore one to sneak into Hordak's base to rescue his sister.
HE. WORE. ONE. 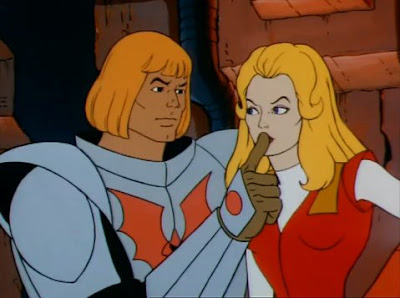 
It was a bit of a strange show, come to think of it.
De gustibus non est disputandum

Not as weird as all that, I'm exaggerating the whole Star Wars knock off lost sibling aspect of their relationship for comedic effect. Nothing happened...That we know of.

Evil Horde - Horde Troopers
If Hordak has been able to conquer Etheria it is largely thanks to his vast army of robotic Horde troopers. Mindless machines, they don't tire and know mercy nor remorse. 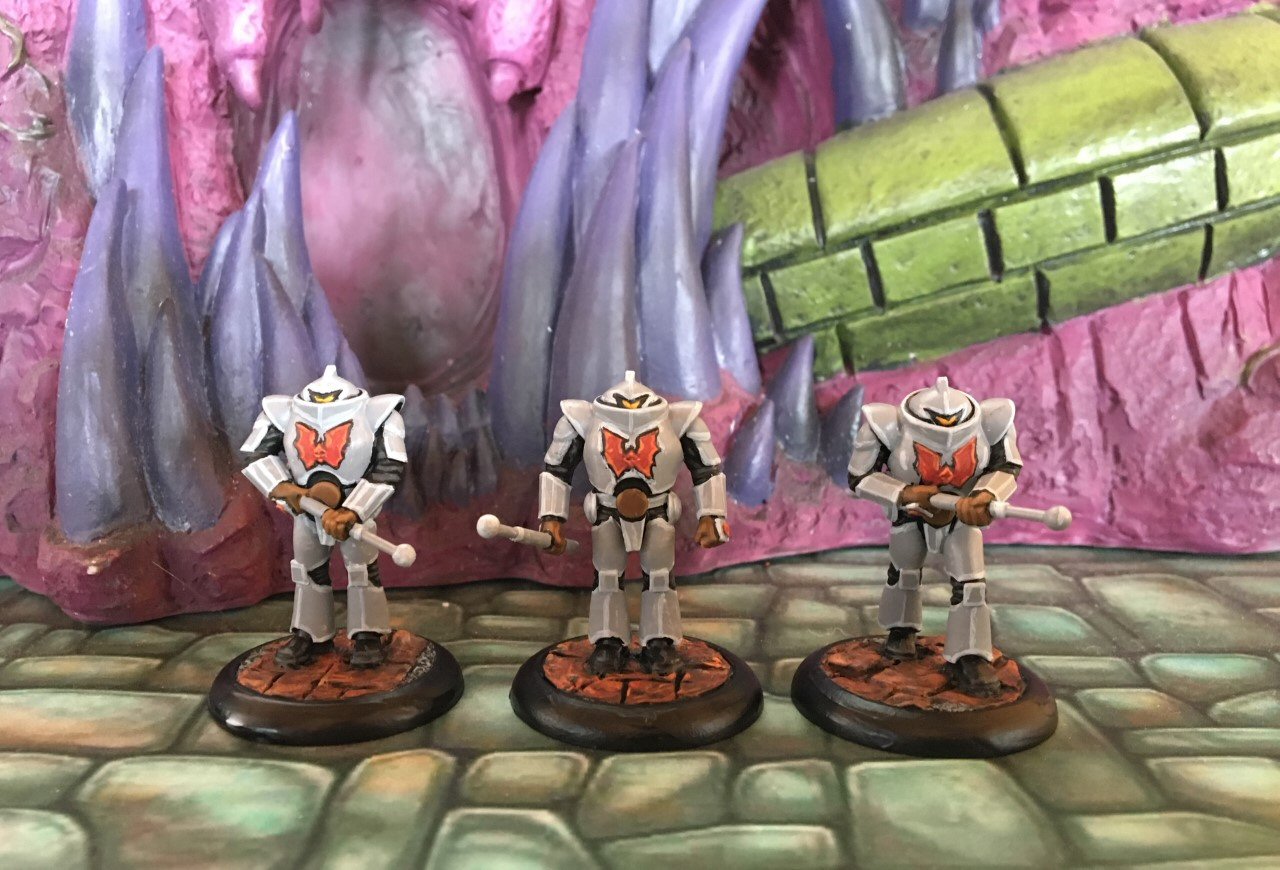 I can't believe it's been 8 months since I was able to paint something new for this project and it shows. The painting skills are a bit rusty and my brushed were running on their last legs, so as a result, I'm not overly happy with how they came out, which is not to blame on the models as they are spot on. Hopefully, now that the painting muscles have been stretched, and with the help of some new brushes to be bought, the next ones will be better. 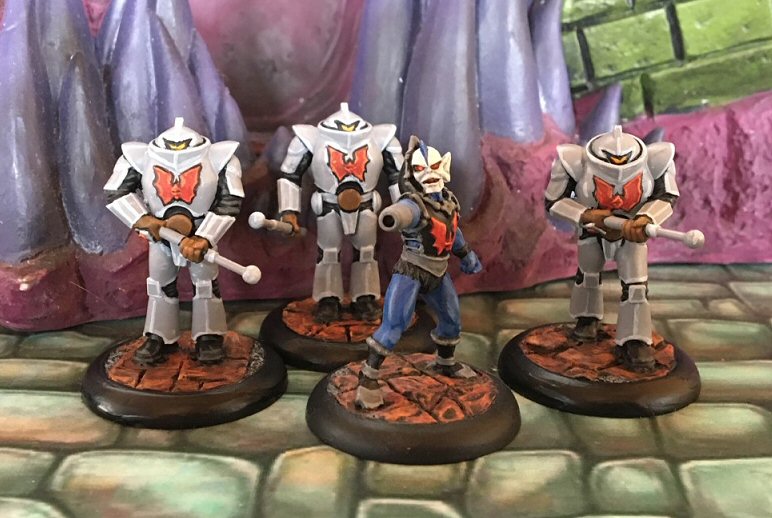 Hordak and some of his Horde troopers 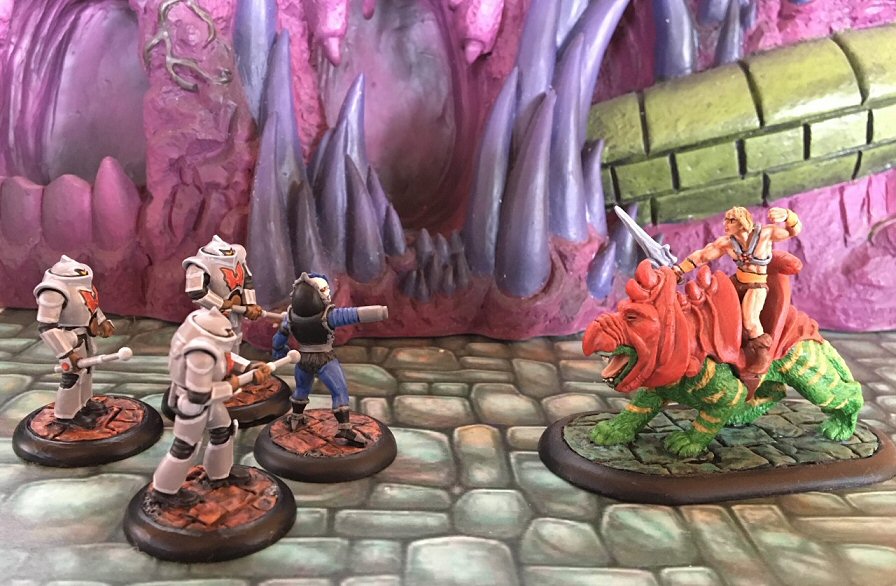 Hordak is backed up by his troopers, but He-Man and Battlecat know no fear. 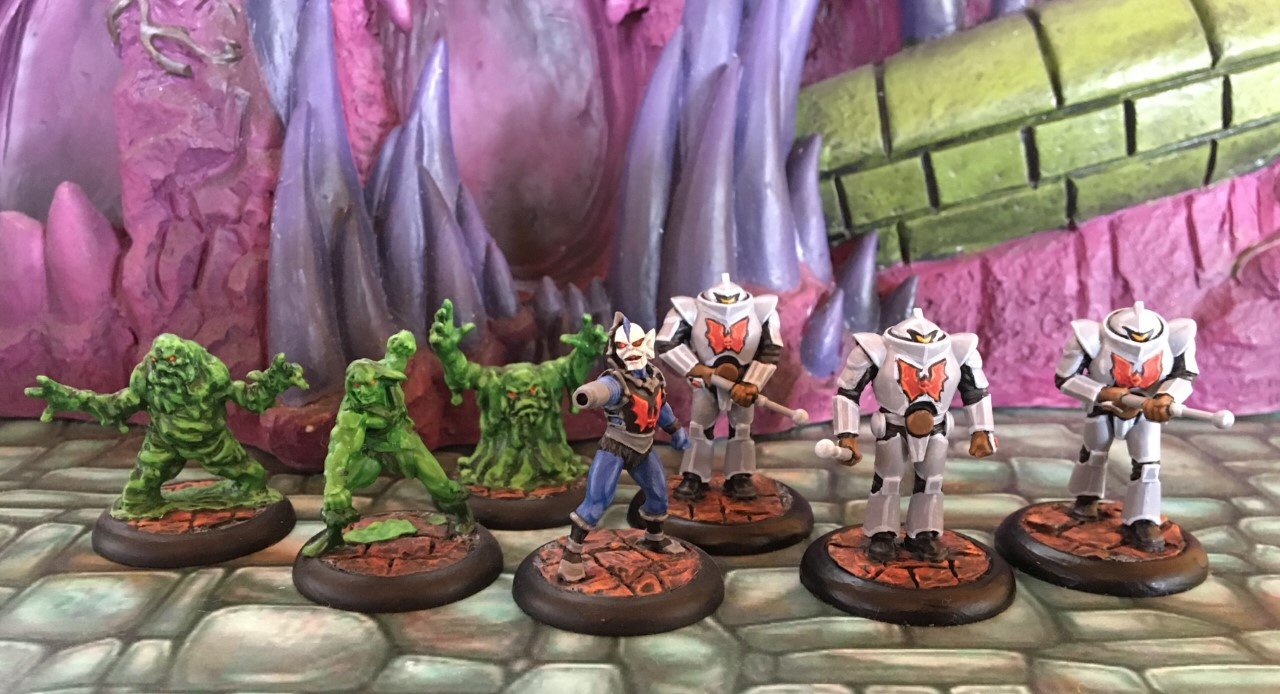 They look great White Knight, just like the cartoon.
The bases look like they'll look good both inside and out, as cracked ground or cobbles, in the sort of world the cartoon is set anyway. Good job!

Thanks! I sculpted all the bases in this project to look like irregular flagstone that, as you say, can work inside and out in Eternia. They are also colourcoded by faction.

Evil Warriors - Skelcon Footsoldiers
Introduced into MOTU continuity by the Ladybird books, the Skelcons are a race of horned demons who worship the bones of their ancestors until a summoning spell, cast by Skeletor, brought them to Eternia. For obvious reasons, they view Skeletor as their god and serve as his soldiers, wearing skull masks and wielding weapons built from the bones of their dead. 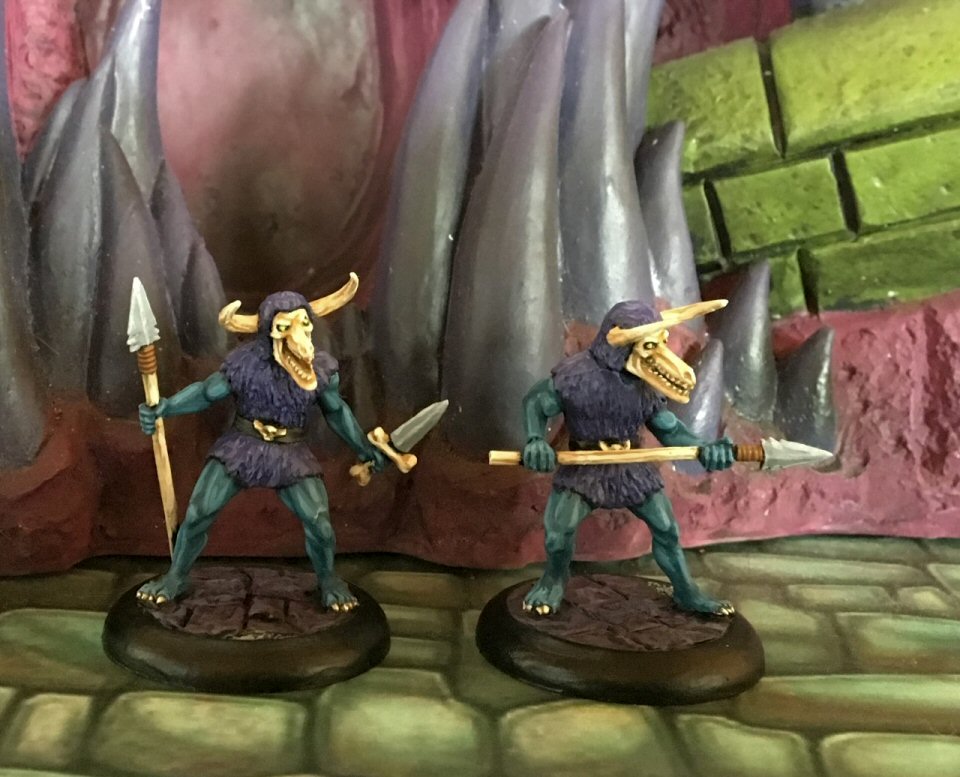 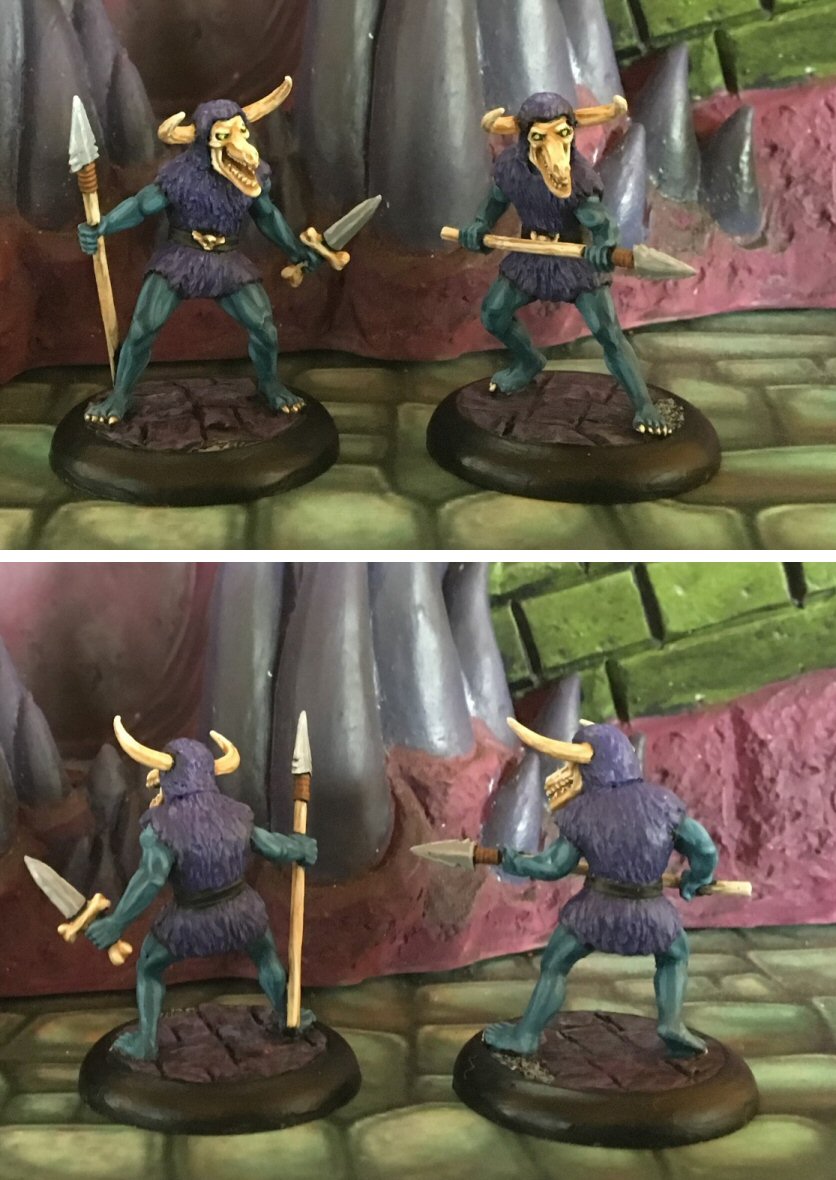 Ironically, I am both happy and unhappy with how they came out. I hesitated longly whether to paint their faces as bone mask, like the MOTUC toy, or in the same colour as their skin, like in the original Ladybird books. I went with the former for more contrast and I think it was a good call. I also wanted their skin tone to be different from Skeletor's, so went with a darker, greener blue. The resulting colourscheme looks great, I think, but ironically, now I sort of wish I did paint them in Skeletor's skintone, like the Ladybird version. The bases are my usual recipe of sculpted on flagstone texture, painted in purple as they are part of the Evil Warriors. 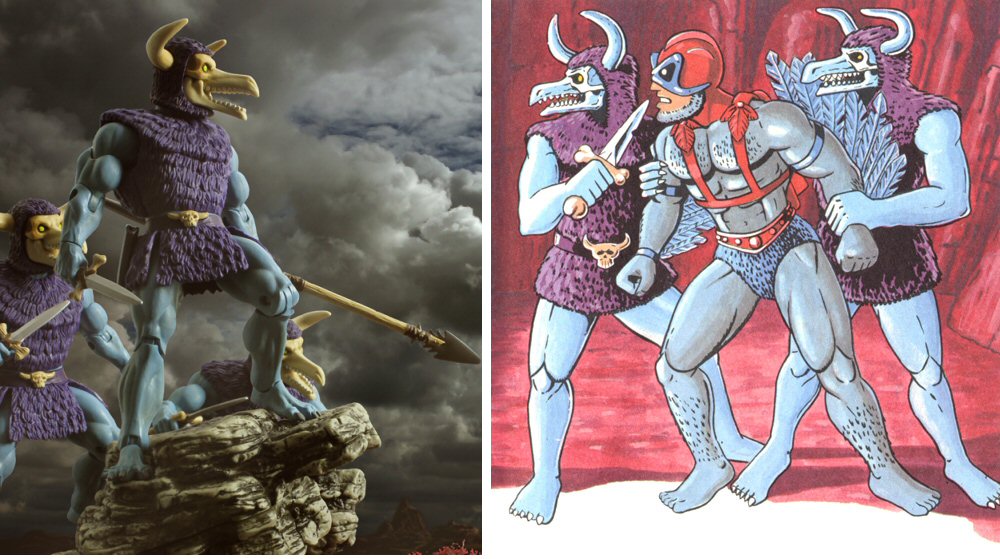 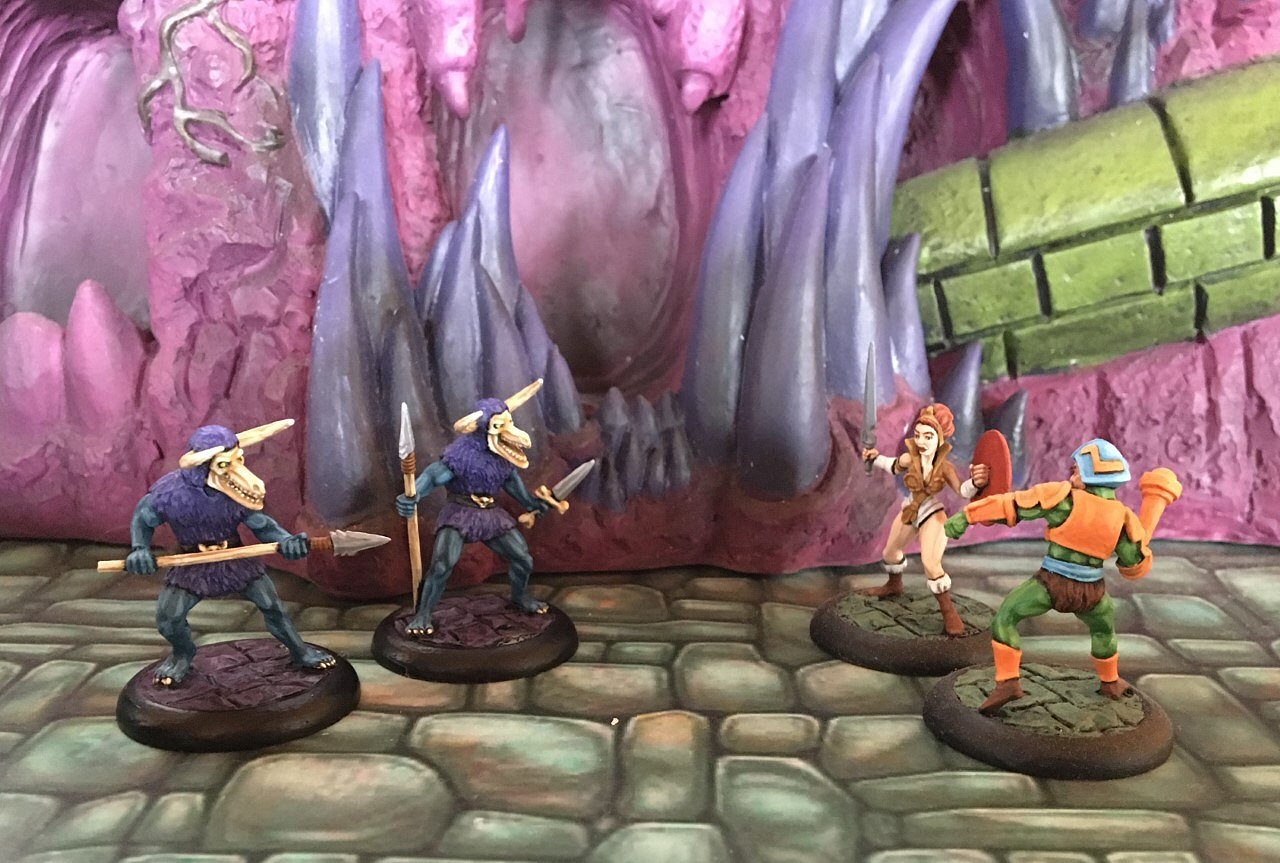 Teela and Man-At-Arms are attacked by some Skelcons 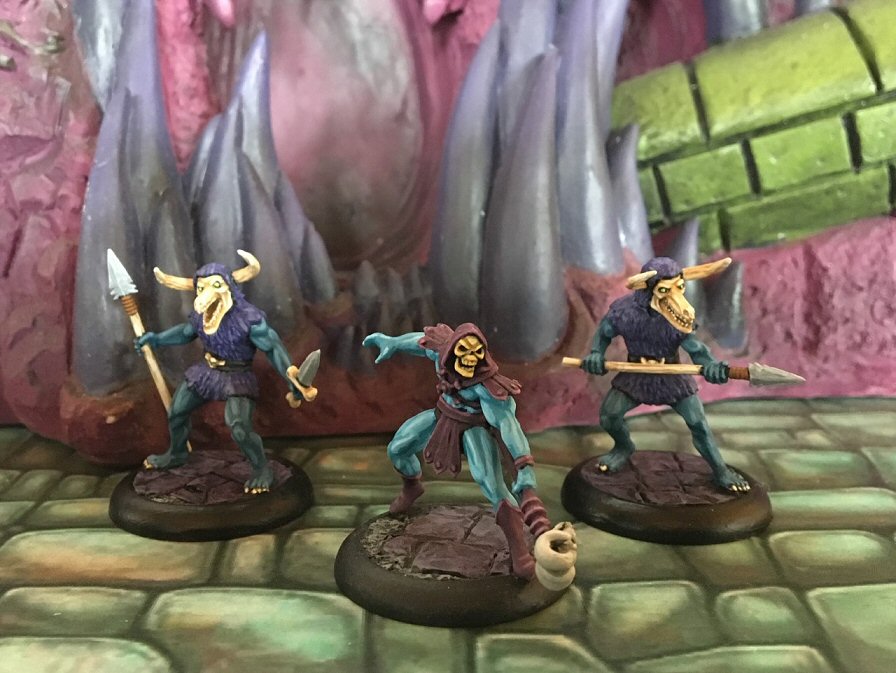 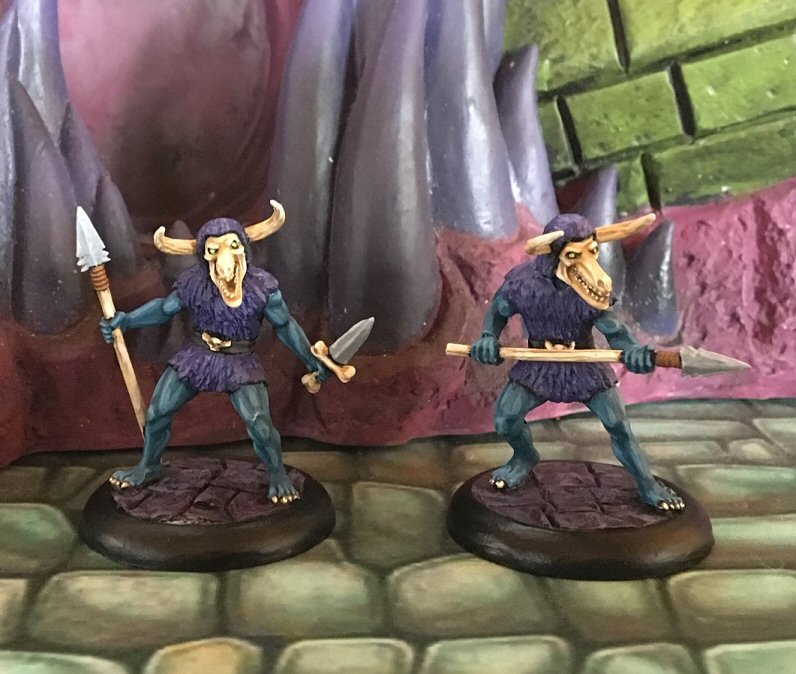 I didn't expect to have another update so soon, but this one practically painted herself (I was just going to do the skin today).

The Sorceress is a force to reckon with and since there is a Castle Hellskull on Anti-Eternia, there has to be an Anti-Sorceress to guard it as well. Her fiery red eyes and black skin give her an unwordly type of beauty, while her red garb evokes hints of a hellish world indeed. 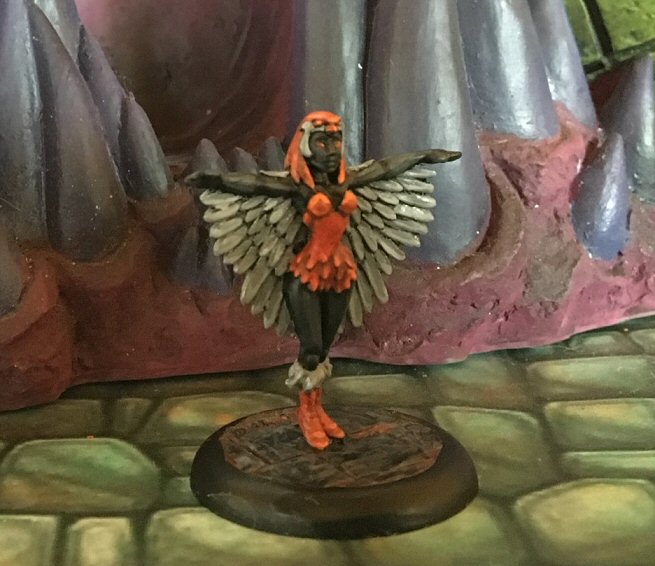 The model is another Quest Miniatures figure sculpted by Boris Woloszyn and in an unusual turn of events, I painted her as the Anti-Eternia Sorceress before I tackle the regular one (because, seriously, who wouldn't put off painting white?). The colour scheme is made up, starting from the Anti-Eternia palette. As the regular sorceress has orange wings and a white bodice, the needed contrast dictated the Anti-Eternia version should have a red bodice and grey wings (or black wings, but that would make her too monotone, you need three colours to have nice contrast). The rest followed from there. The base is my usual sculpted on flagstone, with red painted in the grooves between tiles to simulate the hellscape that is Anti-Eternia. 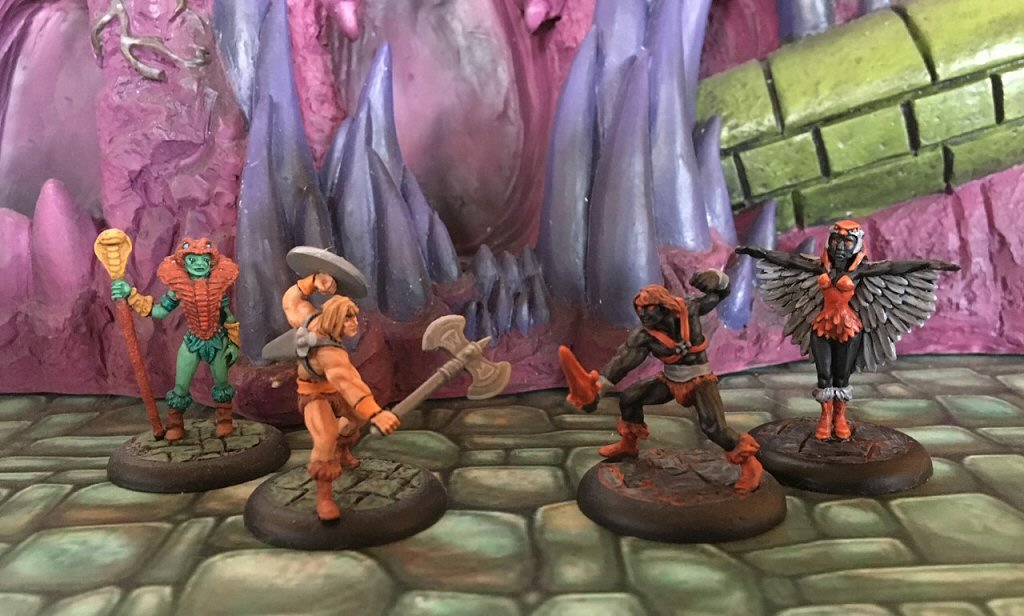 Oo-Larr (minicomic He-Man from a few generations before Adam) dukes it out with Anti-He-Man while their respecitve guides and mentors look on. 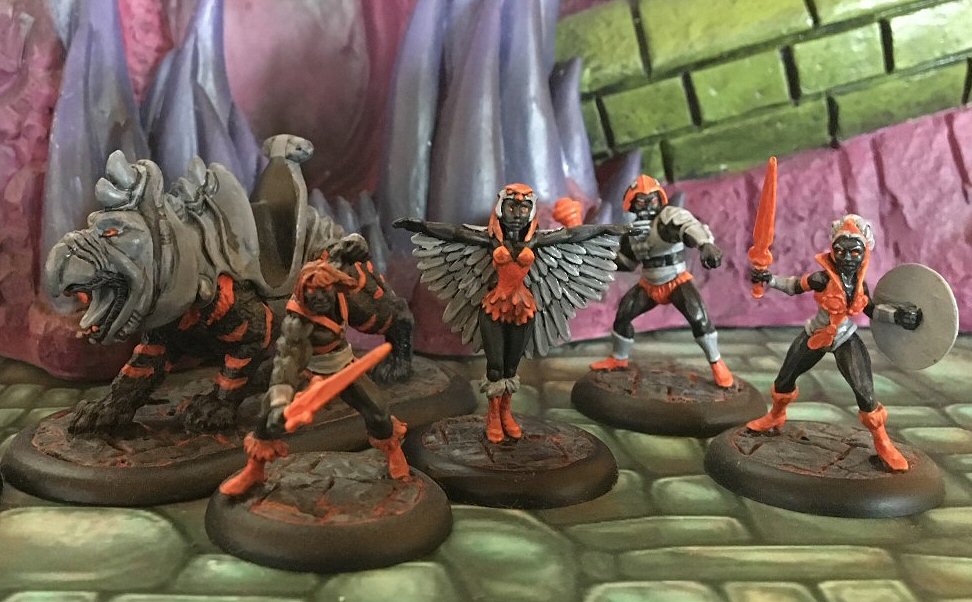 The Anti-Eternians, so far (not including the Man-At-Arms in Windraider).

Blue hairy horned hats, are you sure they aren't an Eternian chapter of the Loyal Order of the Water Buffaloes?

Seriously, they look great and Skeletor needs some menacing minions to seem like a threat IMHO, in the cartoon he always seemed like his gang were a bunch of incompetents, and they didn't even seem to respect Skeletor that much, I don't know why He-Man would find him a threat.
De gustibus non est disputandum

Shadow Beasts are great ape-like beasts who live in tribes throughout the dark hemisphere. They are named thus because they can only come out in the absence of light. Like most beasts, they are vulnerable to Beastman's powers and can be controlled by him to join the fight on Skeletor's side. 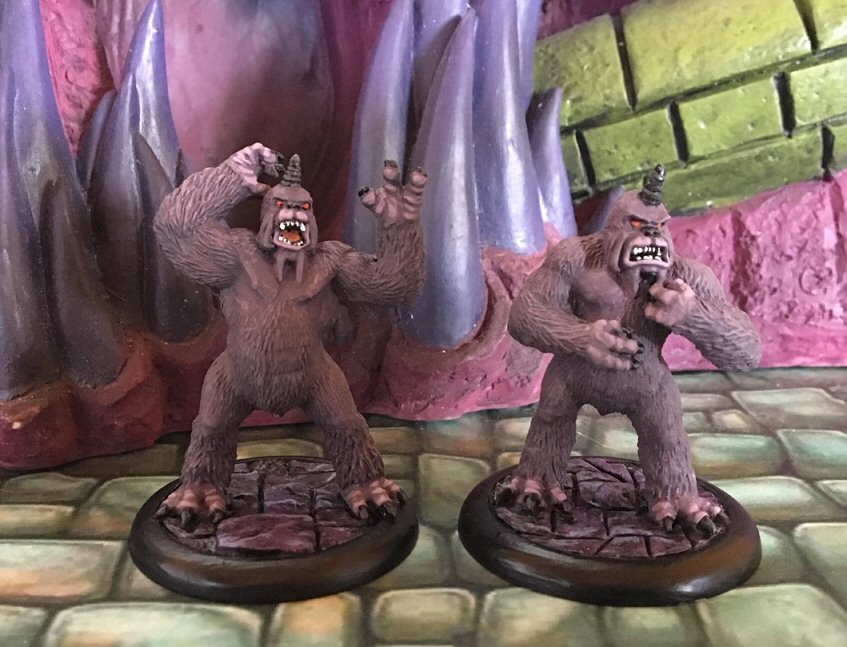 Shadow Beasts, the yeti's of Eternia
I went with the Filmation cartoon colour scheme on this. Other media have shown them in darker, more apelike colours, but I like how the purple shade emphasises the alien, retro pulp quality they have. I originally was going to do their bases in a neutral colour, as they can also be used independently, but ultimately settled for the Evil Warriors scheme, as that will be their main purpose. 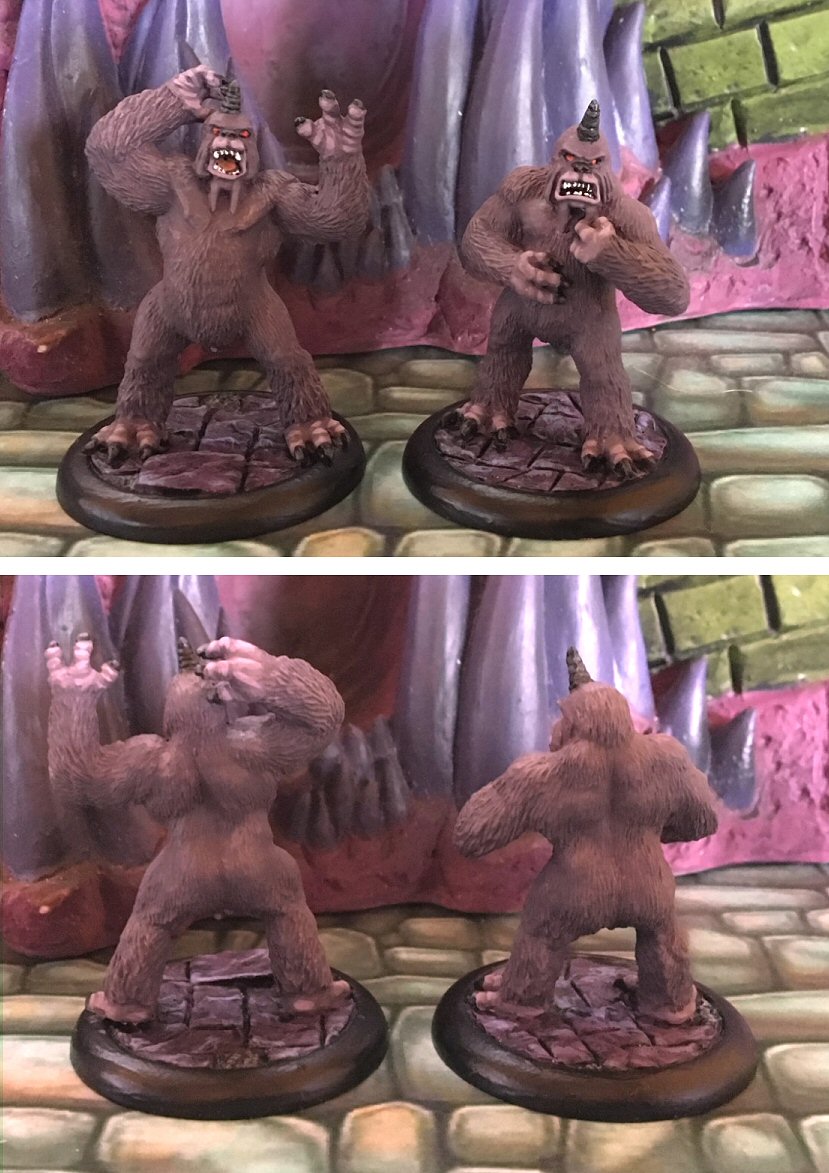 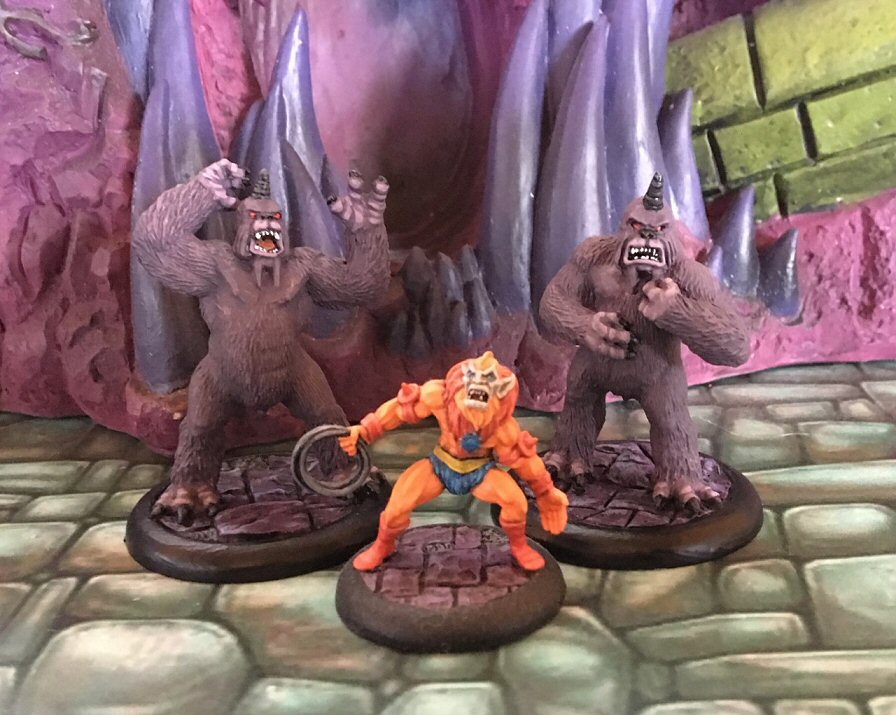 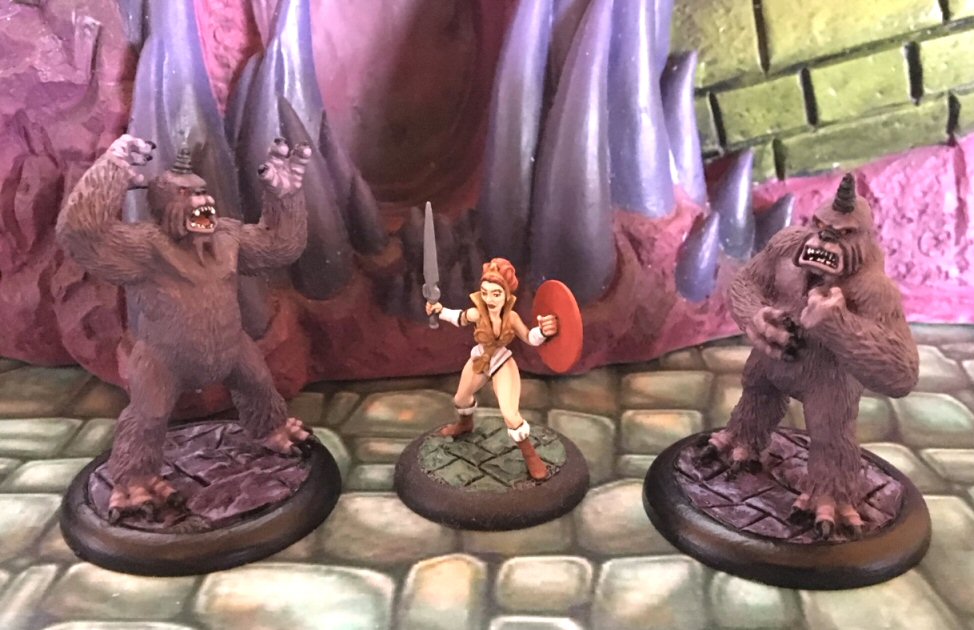 Teela getting surrounded by the Shadow Beasts 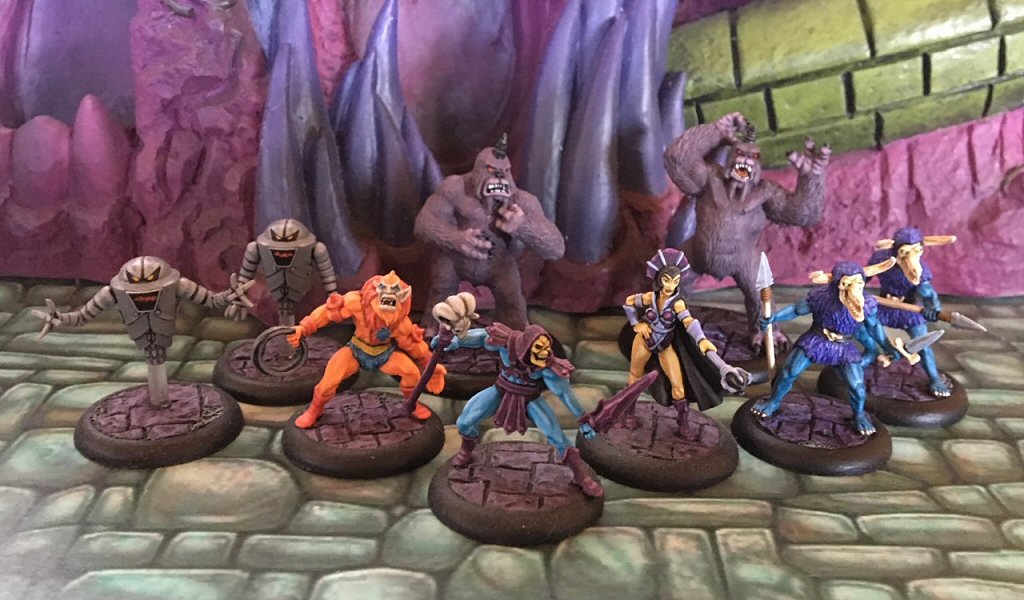 The Evil Warriors so far (not including my alternate Skeletor)