Intrigues and inquiries in a Sengoku domain

Intrigues and inquiries in a Sengoku domain

We had another Sengoku game last month, at "24 Heures du Jeu" convention in Theix-Noyalo (Brittany). With 13 players and a GM it was the largest game that our group ever organised by itself.

There were four gaming tables, representing different parts of a large domain (the characters were free to go from table to table). Ruleset was Argad with some adaptations.

It was still a part of our Sengoku campaign. After the events of the previous games, which saw the victory of one family over its opponents, this scenario was totally oriented towards RPG diplomacy and inquiries in the newly conquered domain. In fact there was no fighting at all! And only two casualties (as far as I know), a NPC murdered in town (I did not witness it, my own character was busy visiting some monk on a faraway table when it happened), and the village governor (PC) who had to do seppuku near the end of the game when his lord (PC) discovered that he had disobeyed all orders because he preferred to harass the villagers and travellers for petty reasons instead. 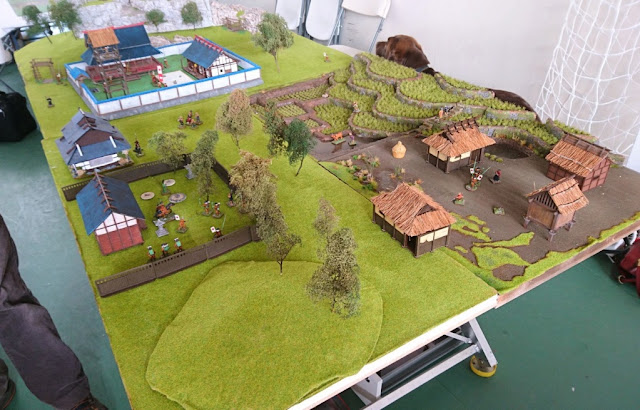 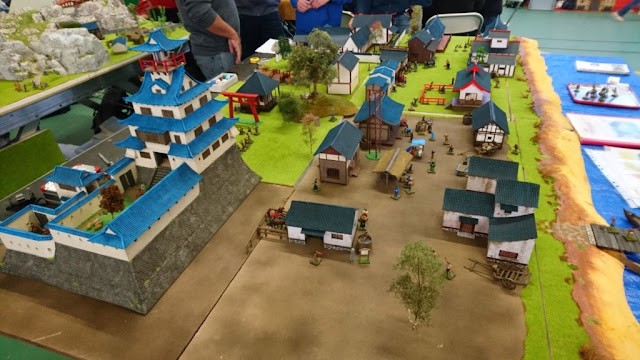 Just reading about the effort that went into this left me exhausted.

I hope everyone was satisfied (and how could they not be?).

Wow! That is a truly wonderful effort!

I Froth because I care about miniatures.

We are lucky with this campaign, two talented members of our gaming group have been making lots of buildings, a castle each(!) and houses and temples etc for this historical context, so when they bring everything, and other gamers bring more basic terrain tiles and hills too, we have enough to cover a very large gaming surface.

Also the GM of this campaign spends a lot of time to devise the scenarios and intrigues, to write character sheets for everyone, etc. And there are small surprises everywhere. For exemple, in this game, a female player who usually leads a group of ninjas was only moving from place to place a cart of singers and comedians. So everyone suspected these comedians to be ninjas, but in fact they didn't do any harm during the game. However this player was always busy on other tables talking secretly with some players but not moving any other miniatures. I now think that her real ninjas were in other disguise and moved by the GM as if they were NPCs... it worked so well that I never suspected it during the game.

It is. And it is not. When it is, and when it is not, is the question or the answer, or both or neither.

This campaign is going on, and (Um I didn't mention it yet) on January 26-27 we were invited to display a large gaming table at "Japan Vannes Matsuri" a convention about Japanese culture in Vannes (Brittany, France).

Our GM devised a scenario for the two days. As usual it was a sequel of the previous games.
(AARs still in French)

On Saturday the GM wanted a large battle: the defeated family of previous games had gathered forces, and attacked the occupants of its previous territory.
http://euthanasor-wargamesetmodelisme.b ... esent.html

On Sunday (the GM had spent his whole night imagining a following scenario...) the counter-attack... the attackers passed the mountains, and wanted to find and kill the last (and pregnant) noblewoman of the opposing family...
http://euthanasor-wargamesetmodelisme.b ... ts-de.html 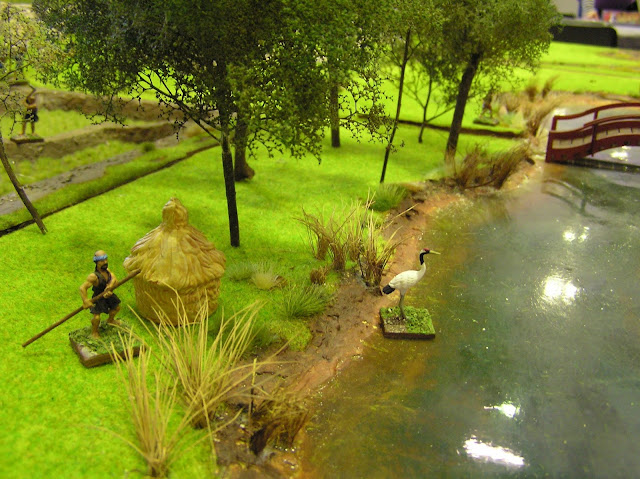 Great stuff!
Beautiful figures, table and fantastic story -
but think you need to do domething about those Ninja!