It would make a good slime pit for your slime guys. There seems to be a slime pit toy that looks quite like it, probably from latter than you're interested in but there was a slime pit toy even back in my day, even if it didn't look quite like your well of evil spirits, so there is a precedent and the idea seems generic enough to work, the one that looks a bit like your well seems to be called the mutant slime pit.
Yours looks great anyway and works just fine as an Evil Spirits Well, I just thought I'd mention it.

Keep up the good work.

It immediately reminded me of those "travel tunnels" or whatever they're called*, from the Terry Goodkind book series. Probably too out-of-universe for your project, and you'd need at least another one -- or several -- for it to work.

Hey-- it looks great, BTW; if you hadn't said otherwise, I would have believed it was from the original toy line.

I hadn't painted any 30mm figure since some time last year, so with some more MotU figures on the way, it was time to get back in the saddle. While I wait for my Faker mini to arrive, I thought I'd get a headstart on his mount.

He-Man has Battlecat and Skeletor has Panthor. It stands to reason that Faker, with his whole He-Man impersonation obsession would get his own mount. Copycat, sometimes referred to as Bogus Cat, is another fanmade creation, subject of a lot of custom action figures. A robotic duplicate of Battlecat, it sports Faker's colour scheme, so that no confusion is possible. 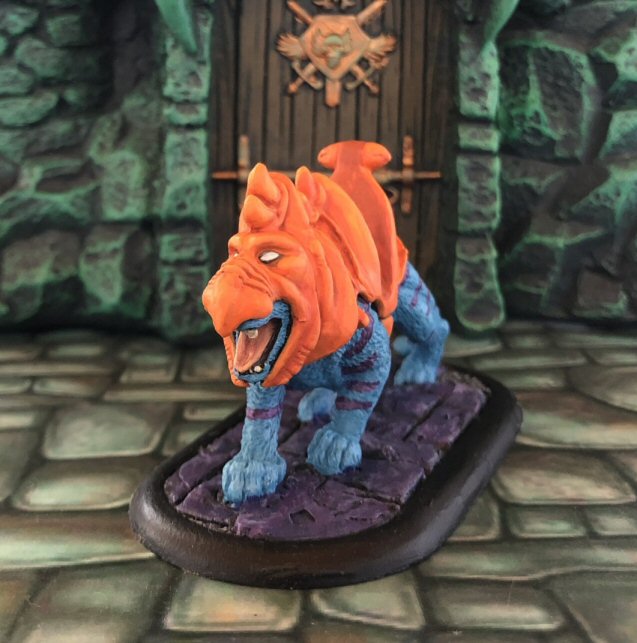 The model is another of the old Grenadier Battlecat models, with a blank resin base from Fenris Games and texture added with putty. 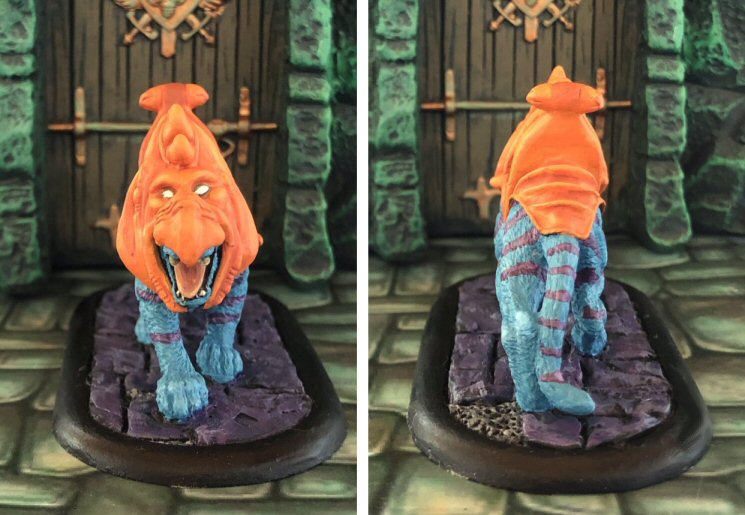 I assume Copycat was created by Skeletor or Triclops, but as I haven't painted my Triclops yet... 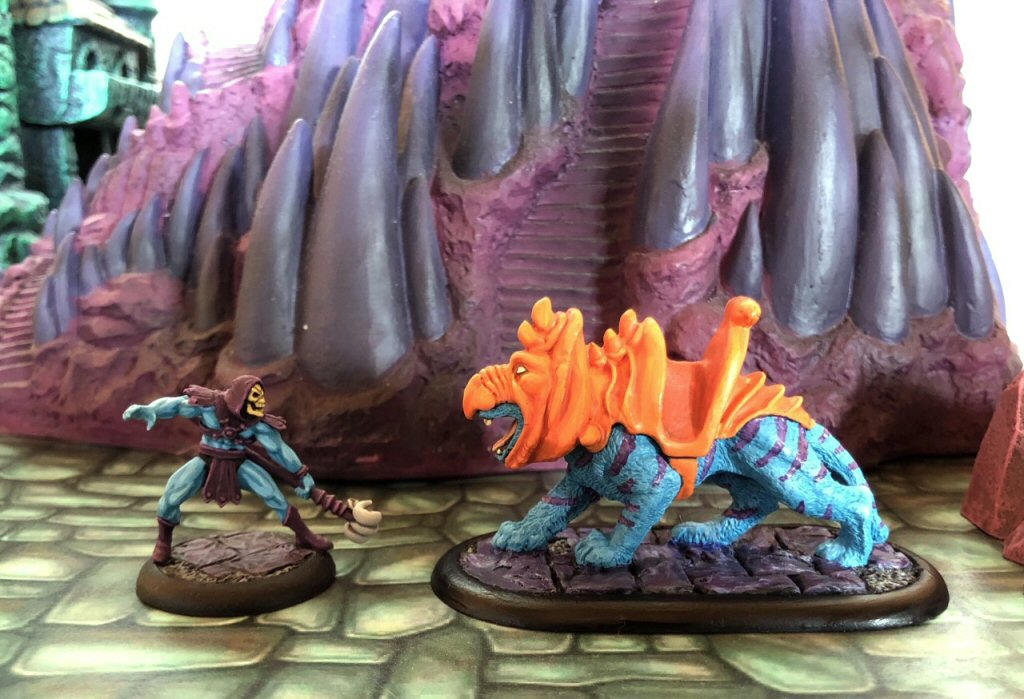 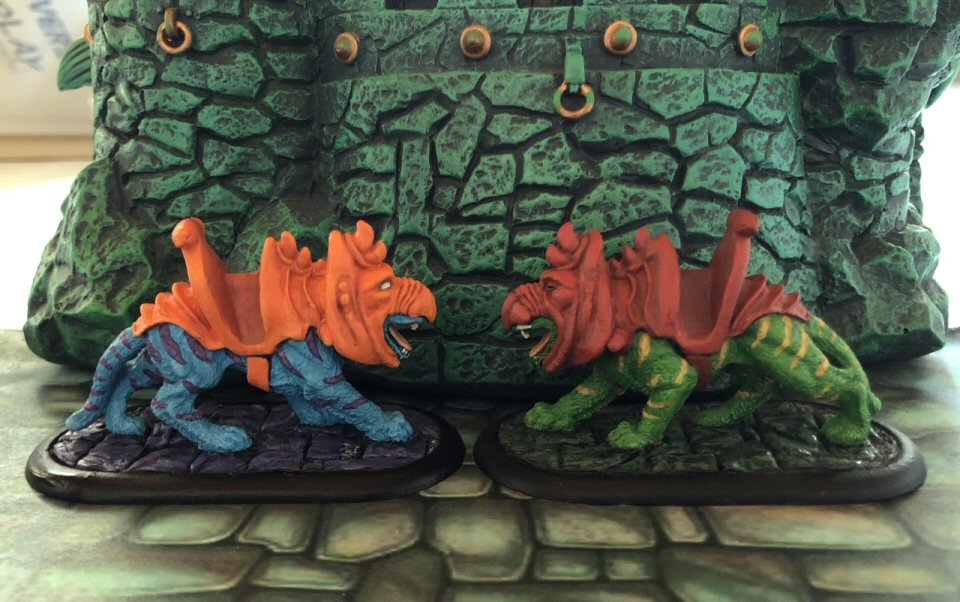 By the Sorceress' beak! What is this freakshow?

And a quick side by side of my three interpretations of Battlecat: regular, copy and anti-Eternia: 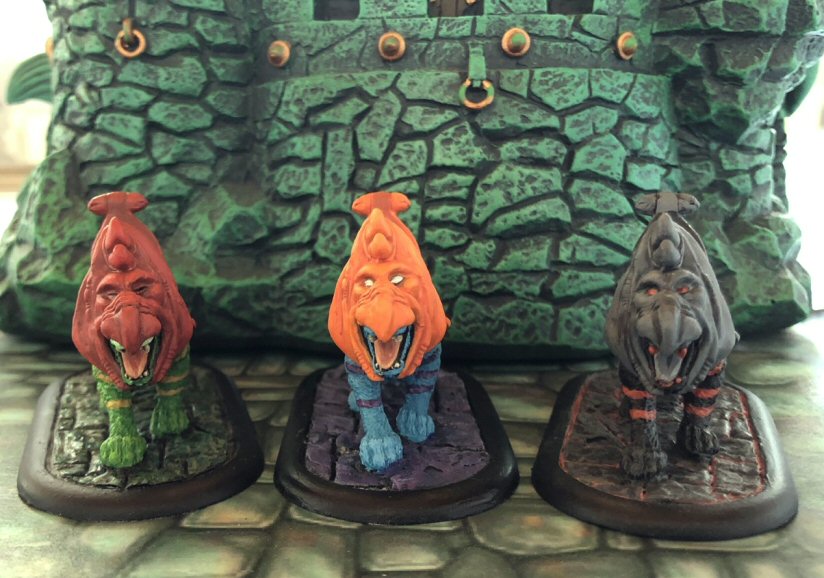 Dragon Blaster Skeletor was one of those figures that didn't appeal much to me as a kid, since it wasn't the original Skeletor figure, but later in life I came to appreciate it a lot more as a pretty cool toy. So I figured that if I didn't have a Dragon Blaster Skeletor in 30mm, I might be able to have the dragon itself with a little conversion work. The conversion work was mostly done more than a year ago, but somehow I never got around to ordering the chain I needed to finish it until about a week ago. 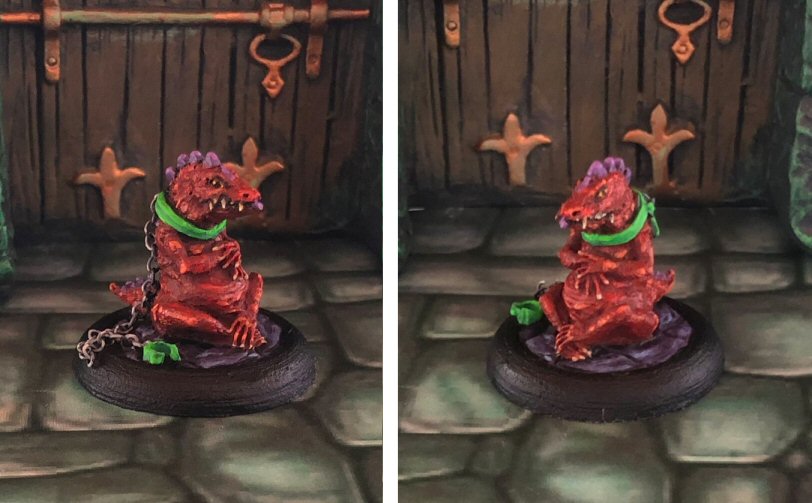 The Dragon Blaster Dragon, temporarily released from it's place on Skeletor's back

The base model is a neat little fantasy lizard figure made by the excellent Forge of Ice. Their lost worlds kind of range is very reminiscent of MotU in a lot of ways. I added the spikes on the top of its head, the collar with the keypad lock and the chain with a shackle on the other end for when Skeletor reclaims his pet. The base is a 20mm blank lipped base from Fenris Games, with added flagstone texture.

A better look at the added details, like the lock and chain. 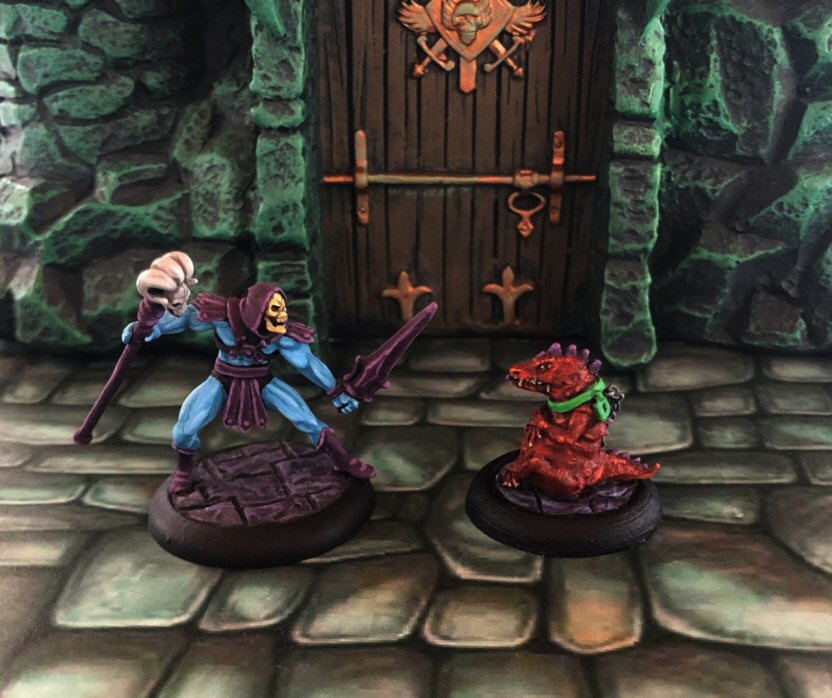 I've released you from your bonds. Now, my pet, destroy the gate of Castle Grayskull with your hot flames! 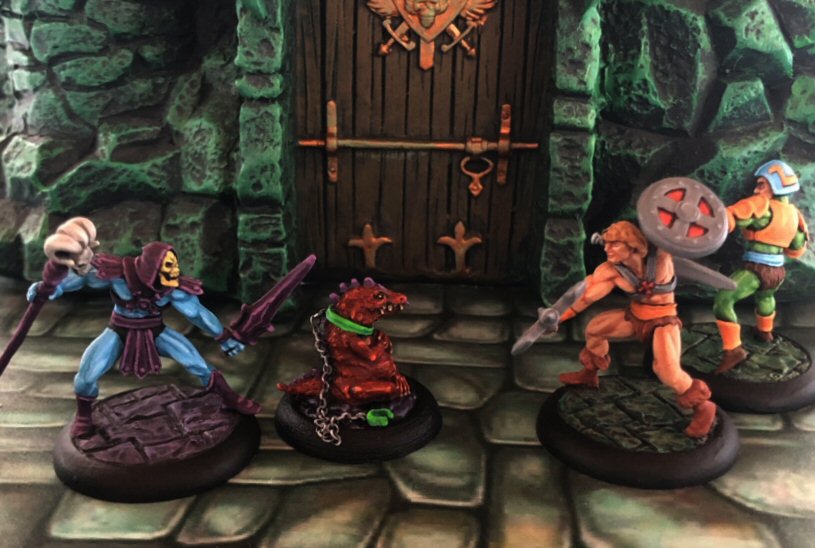 You're too late to stop me He-Man! Your powers won't protect you from the searing hot flames of the Dragon Blaster! 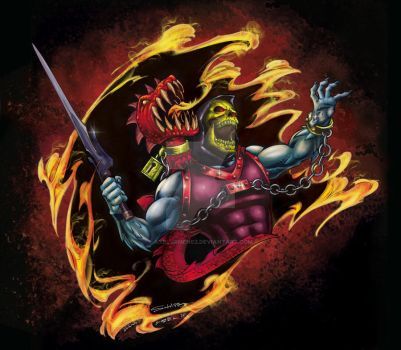 For those not familiar with it, here's some awesome art by Axel Gimenez depicting the dragon!

While he has had different backgrounds in different media, the main consensus is that Faker is an evil robot built to impersonate He-Man and serve the forces of evil. Being blue skinned, depending on the medium this scheme either only works in the dark or Faker can temporarily assume He-Man's colours. Either way, he is an iconic character. As the majority of my collection is Filmation inspired, I chose to paint him here in the alternate "pink" colour scheme featured on his cardback art, which is also the version that was used in the Filmation style fanmade hommage "The Return of Faker" (sadly unreleased for viewing due to IP issues). I think this version adds more interest to the model and a welcome bit of contrast with Copy-Cat. Faker, with his imitation Powersword

The model is another private commission done by a fan, that was available in limited quantities for a short while. The base is the usual blank lipped base with texture sculpted on and painted to match the rest of the Evil Warriors. 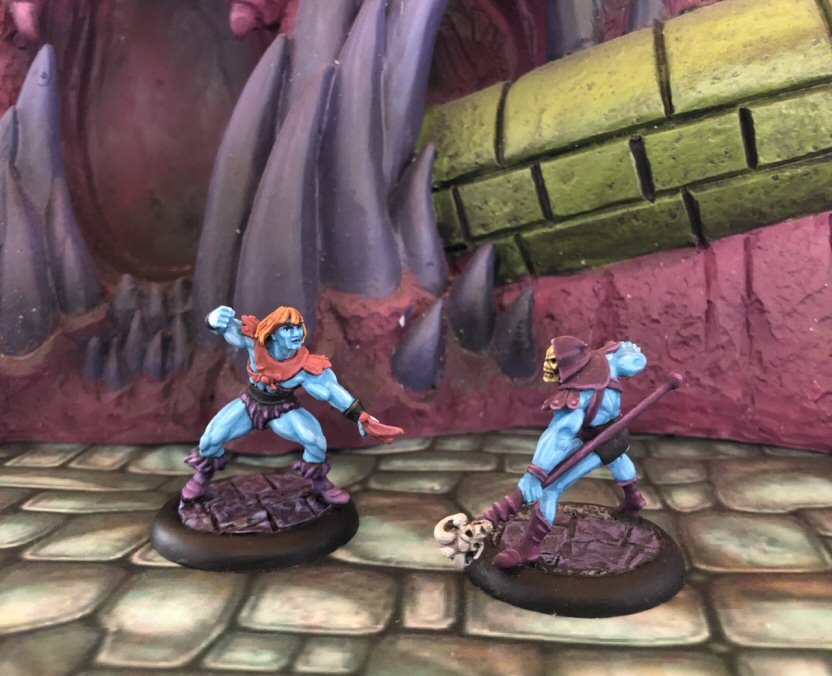 Rise, my puppet. I have created you in He-Man's image, therefore I shall name you "Faker", nyaaah! 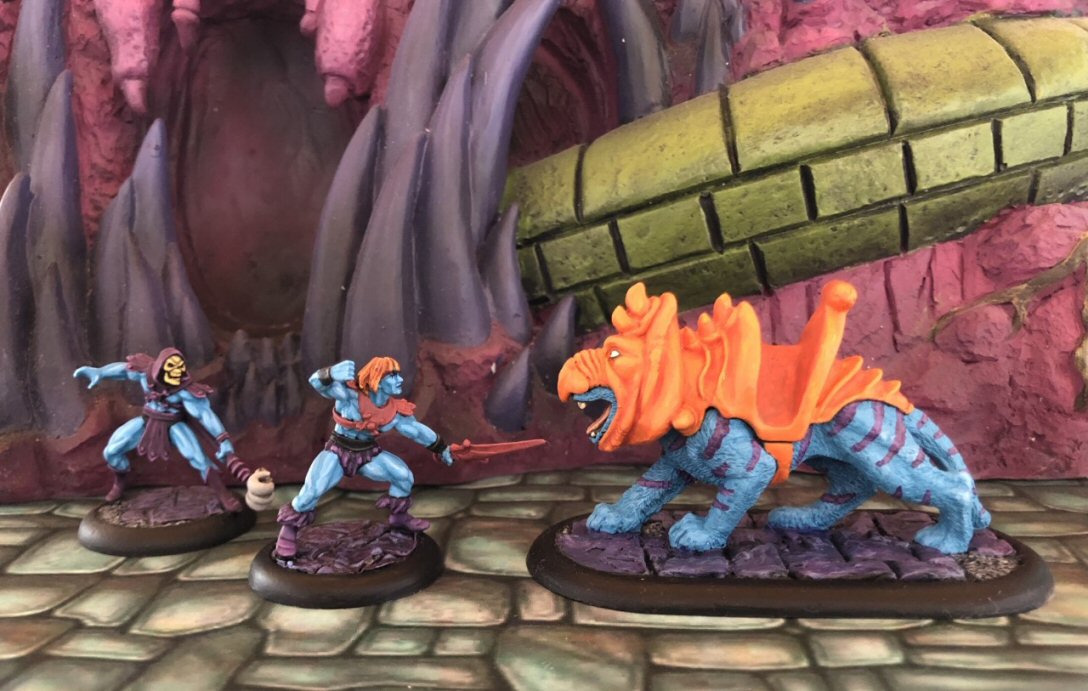 I have created this pet for you, to aid you in your battle against that goody-two-shoes, He-Man. 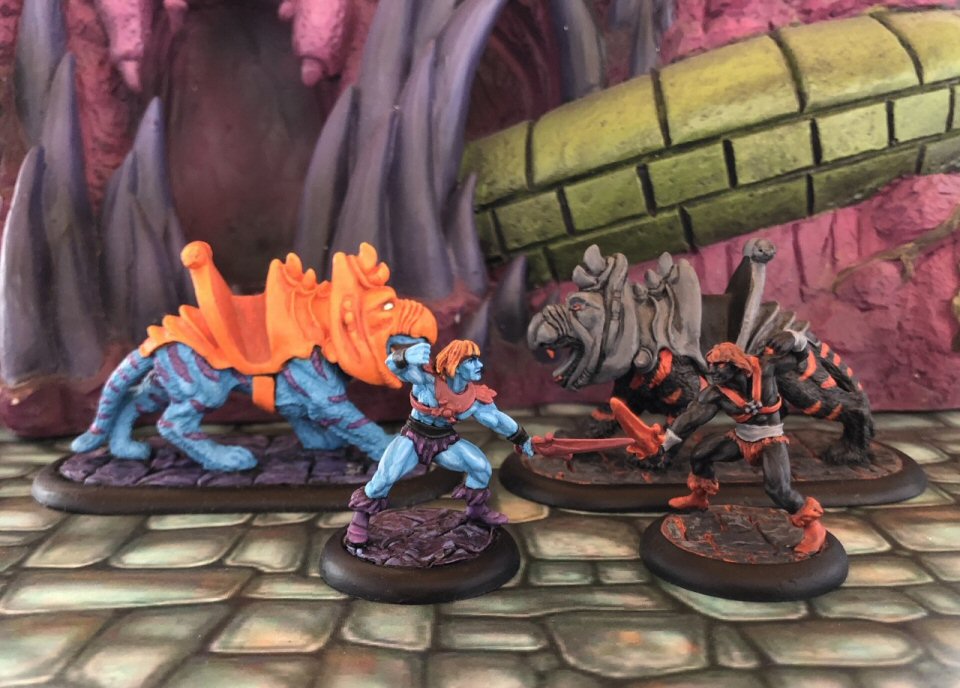 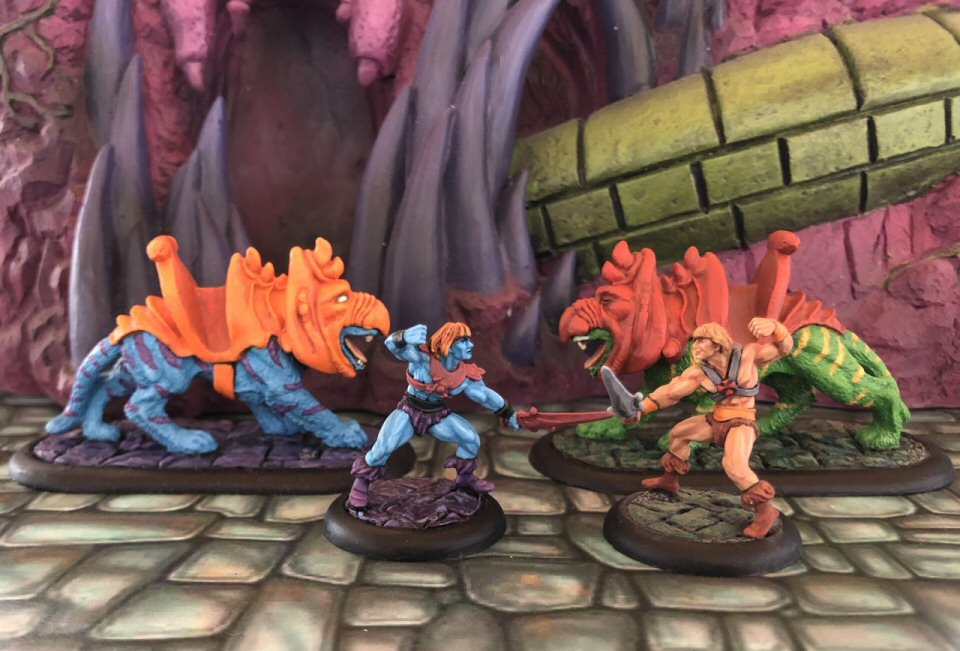 "At last, now we shall learn who is the stronger!" - "By the Goddess! What's this madness?" 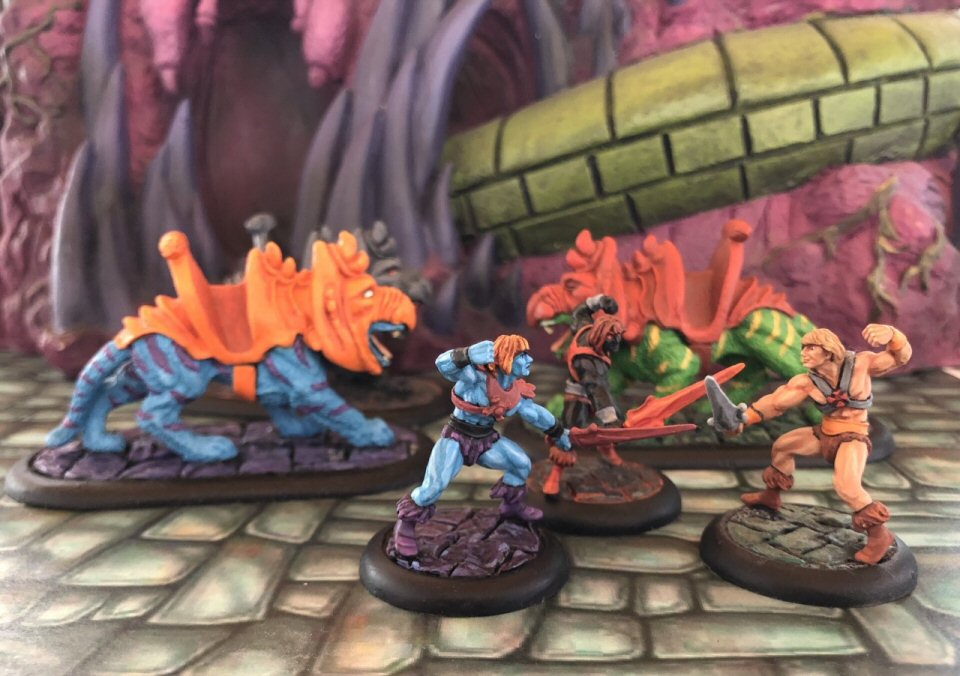 Battlecat: "I hate to say this, He-Man, but we may be in some real trouble here..."

He-Man and Faker, side by side: 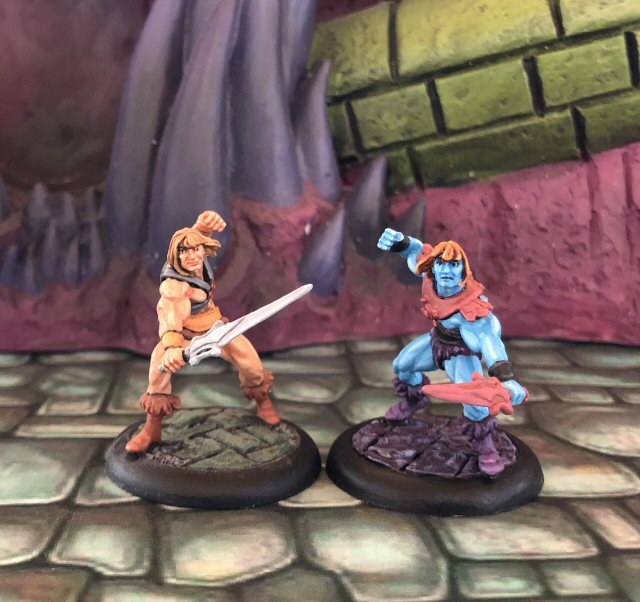 And a shot of Faker and Copy-Cat for the family photo album: 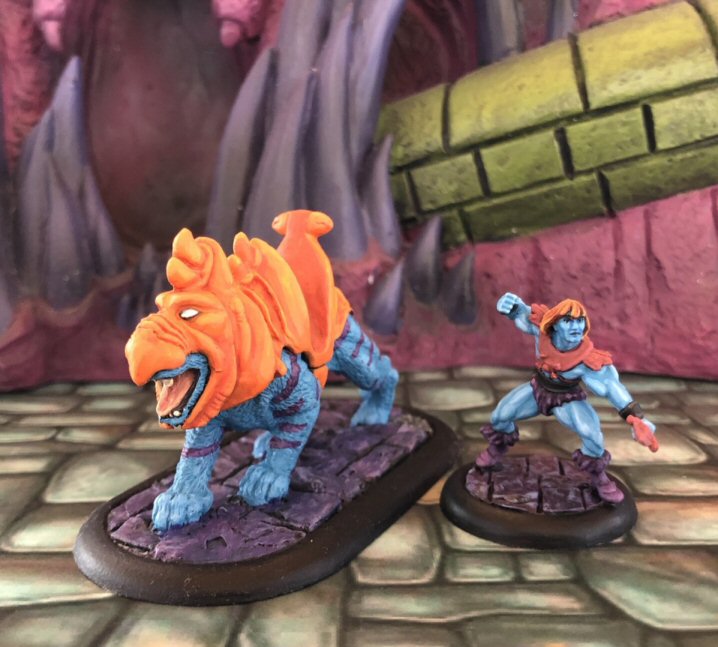 For those not familiar with it, a look at the inspiring original cardback illustration and "The return of Faker. I did initially consider giving him blank white eyes, like the second image, but I wanted him to look more alive. 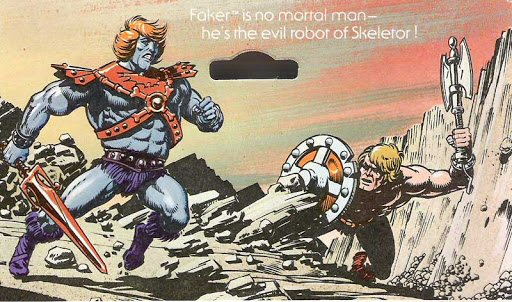 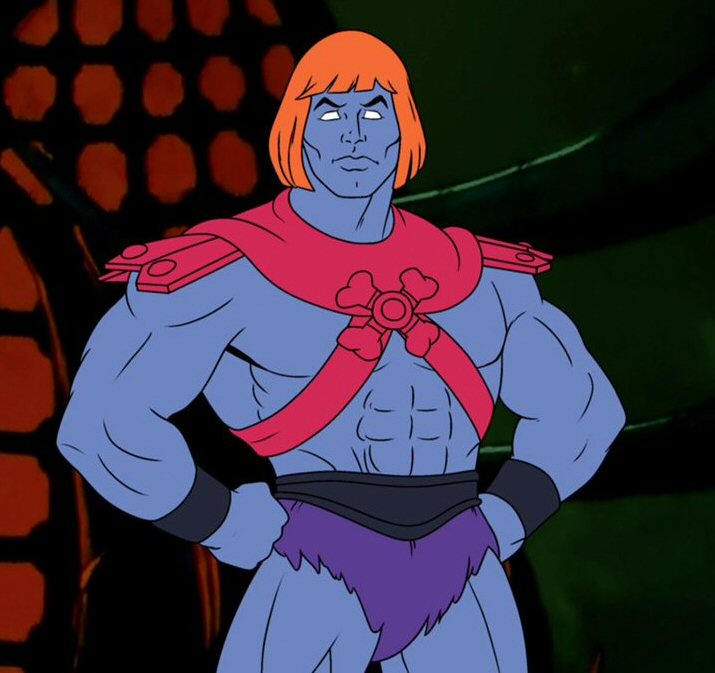 De facto ruler of the planet Sagar, descended of a long line of despots, Overlord is the main nemesis for our hero Blackstar. More akin to Hordak than Skeletor, he is fairly successful in his endeavours and more competent in keeping his underlings in check, resulting in his uncontested dominion of the planet. Uncontested, until John Blackstar entered the scene at least. Wielder of the Powersword, his goal is to take it's second half, the Starsword, from Blackstar to assemble it into the Powerstar and cement his position. While he came very close to achieving that goal, the final victory keeps eluding his grasp and Blackstar and his allies have started whittling away at his forces. 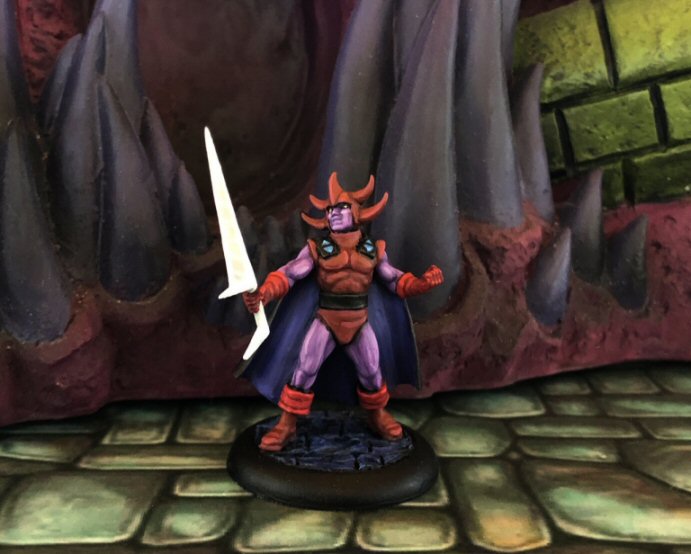 Overlord, the master of his domain.
The miniature is another privately commissioned limited release, with a custom base to match my other bases. I chose dark blue to be the colour for this faction, mainly as I was running out of good options. 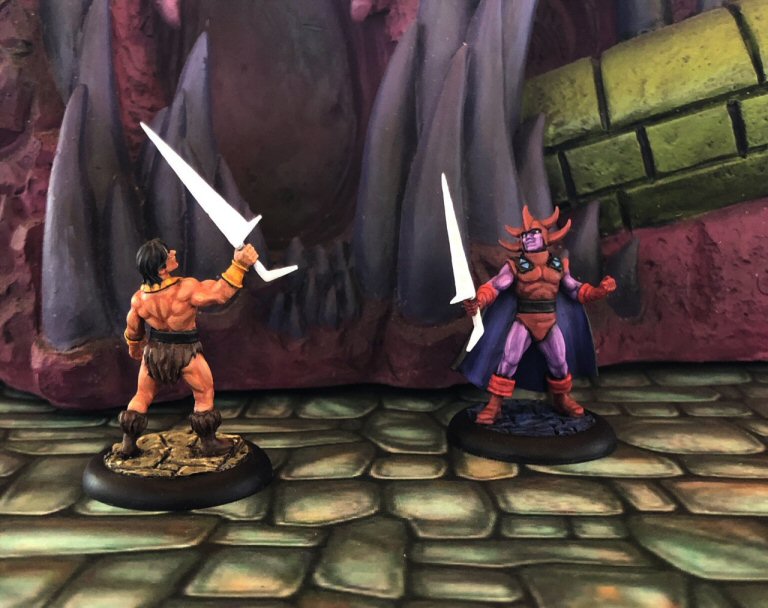 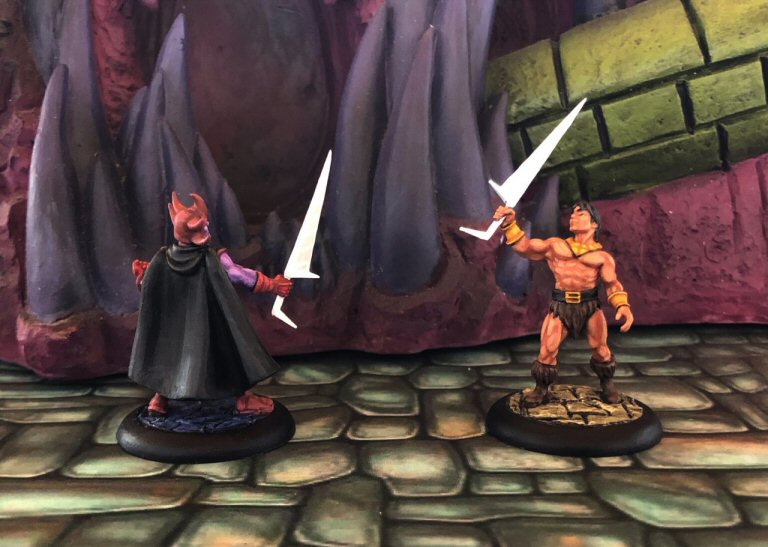 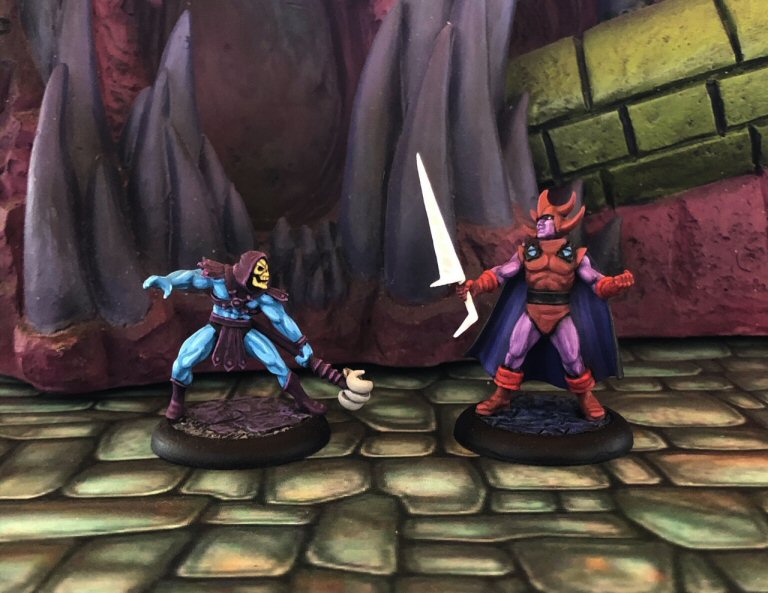 Maybe we can help eachother, nyaaah!

Fun fact, both Skeletor and Overlord were voiced by Alan Oppenheimer in their respective Filmation cartoons. 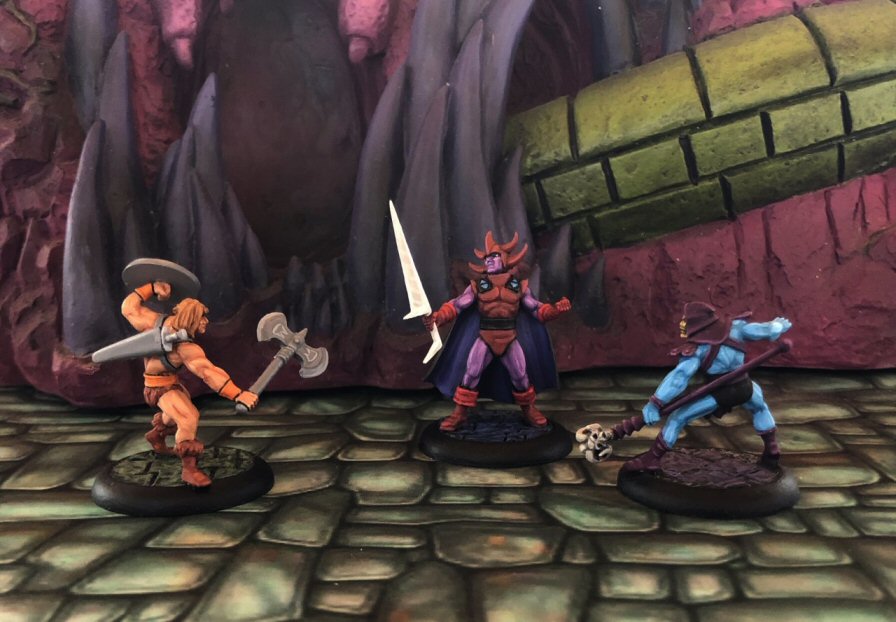 This project is epic. It makes me sorry I was too freaking old to be part of the Masters saga.

You've had me thinking back to my childhood-- whether there was something similar for me. But I got nuthin'. Even the Herculoids I brought up earlier here was during my teenage years. Nuts.

I can offer only this -- admittedly out-of-season -- tribute:

Keep up the good work!

I never mustered up the courage to watch the christmas special. I can only expect it to be quite dreadful, like the Star Wars one I also refused to watch.

Now that I've done Faker and Copy-Cat, I naturally had to do a Faker on Copy-Cat, to match my He-Man on Battlecat conversion. To convert Faker into a riding position, I only cut off the left leg at the parting line with his loincloth, pinned it back in place in a more fitting position and filled the gap with putty. The Grenadier Battlecats are good for that sort of thing, due to the way the saddle is done. Another Fenris Games blank base, with added texture finishes the look. 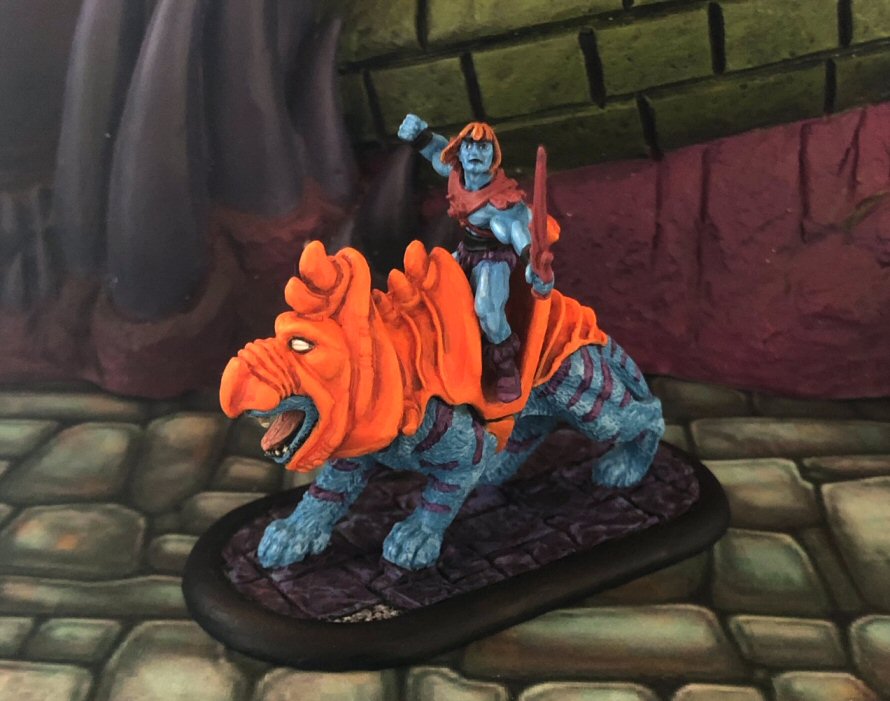 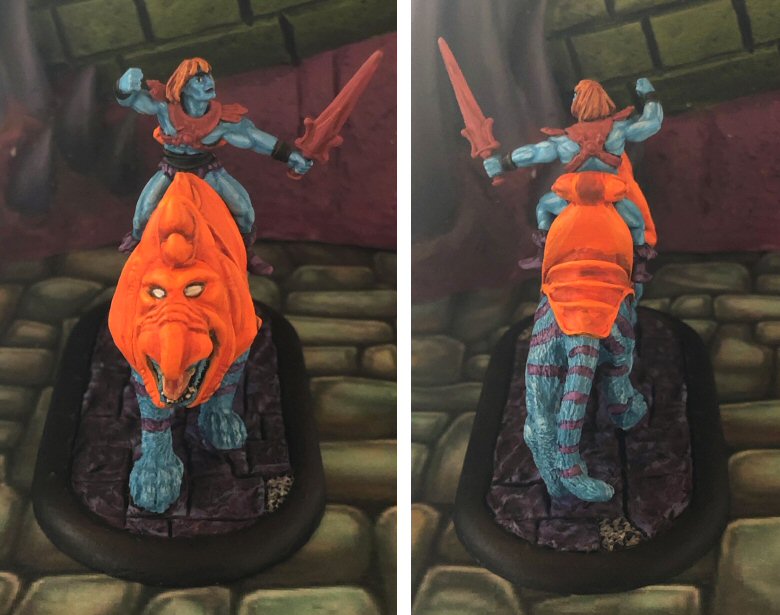 Now I have a matching Faker mounted and on foot. 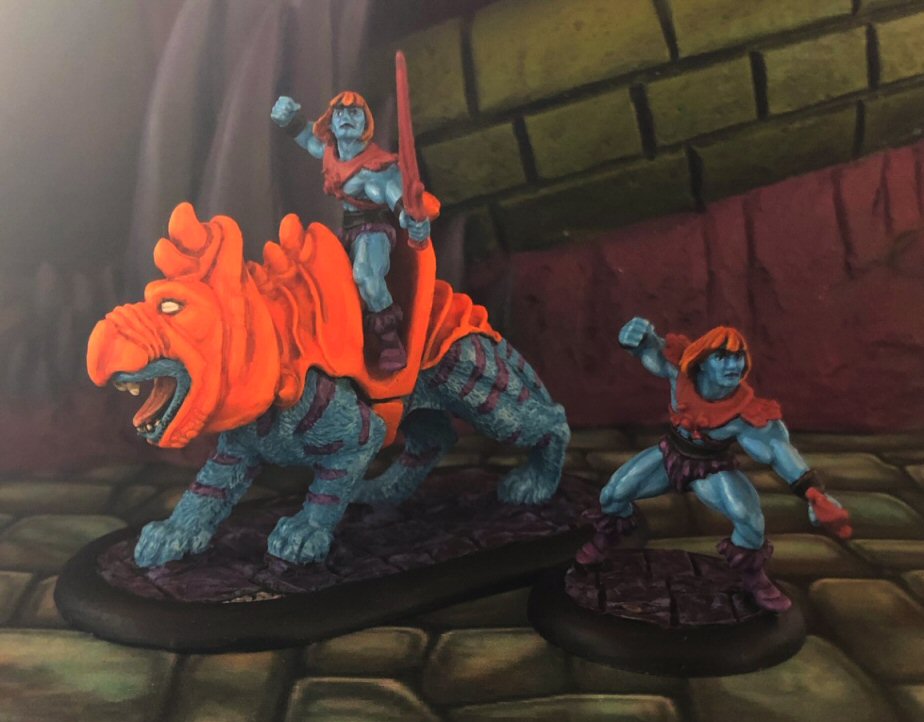 And with the matching He-Man: 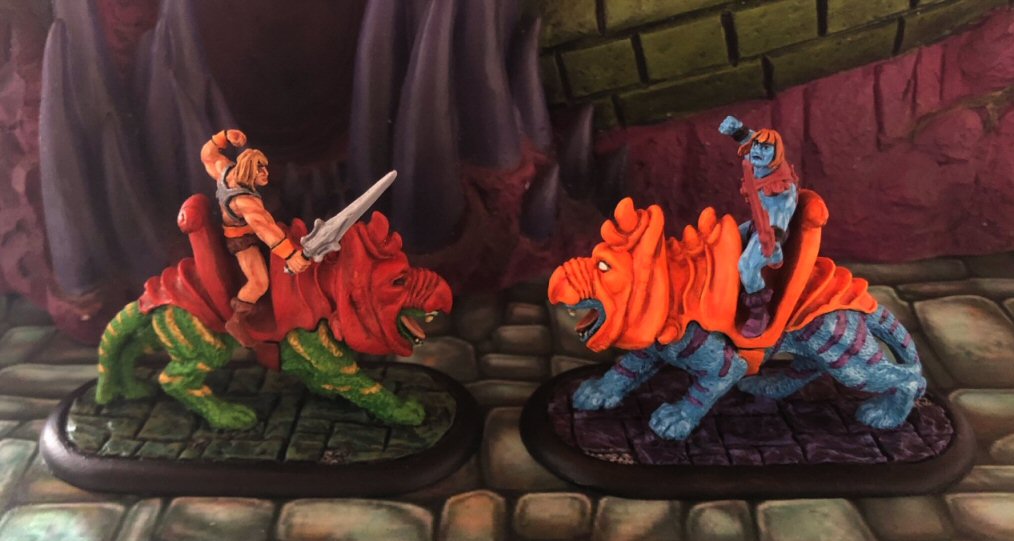 A badly lighted final shot just to prove I did indeed paint a second Copy-Cat and it's not just the one from before. 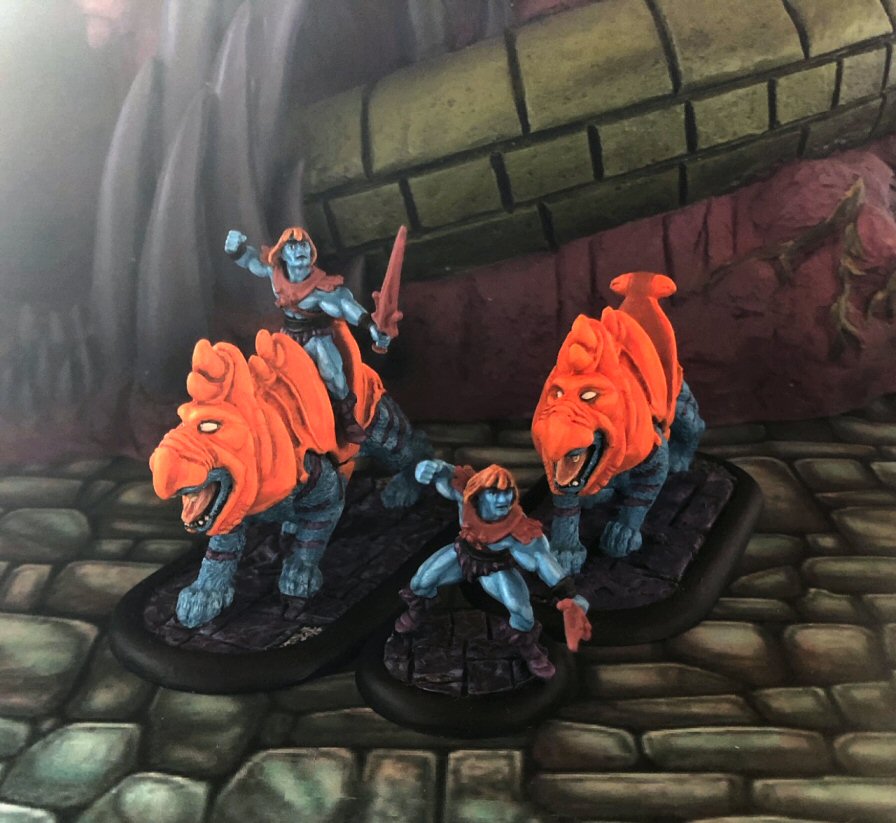 I was a bit too old to get into He-man, but my younger brother loved it and had a ton of the action figures. Regardless, I can certainly recognize amazing talent, and this thread is full of it. Great job.

Users browsing this forum: No registered users and 11 guests