Hello again, it's been a while since I updated pictures of my undead army. But I have not been idle. I've taken pictures of some older paint jobs I haven't posted before (forgive me a mistake here and there) and I have been adding to my army with new goodies as well. So on to the pictures!

I first started on these wights way back in 2012 for the Lead Painters' League (link: https://leadadventureforum.com/index.php?topic=39992.0 ). I later added more interesting clothes patterns. 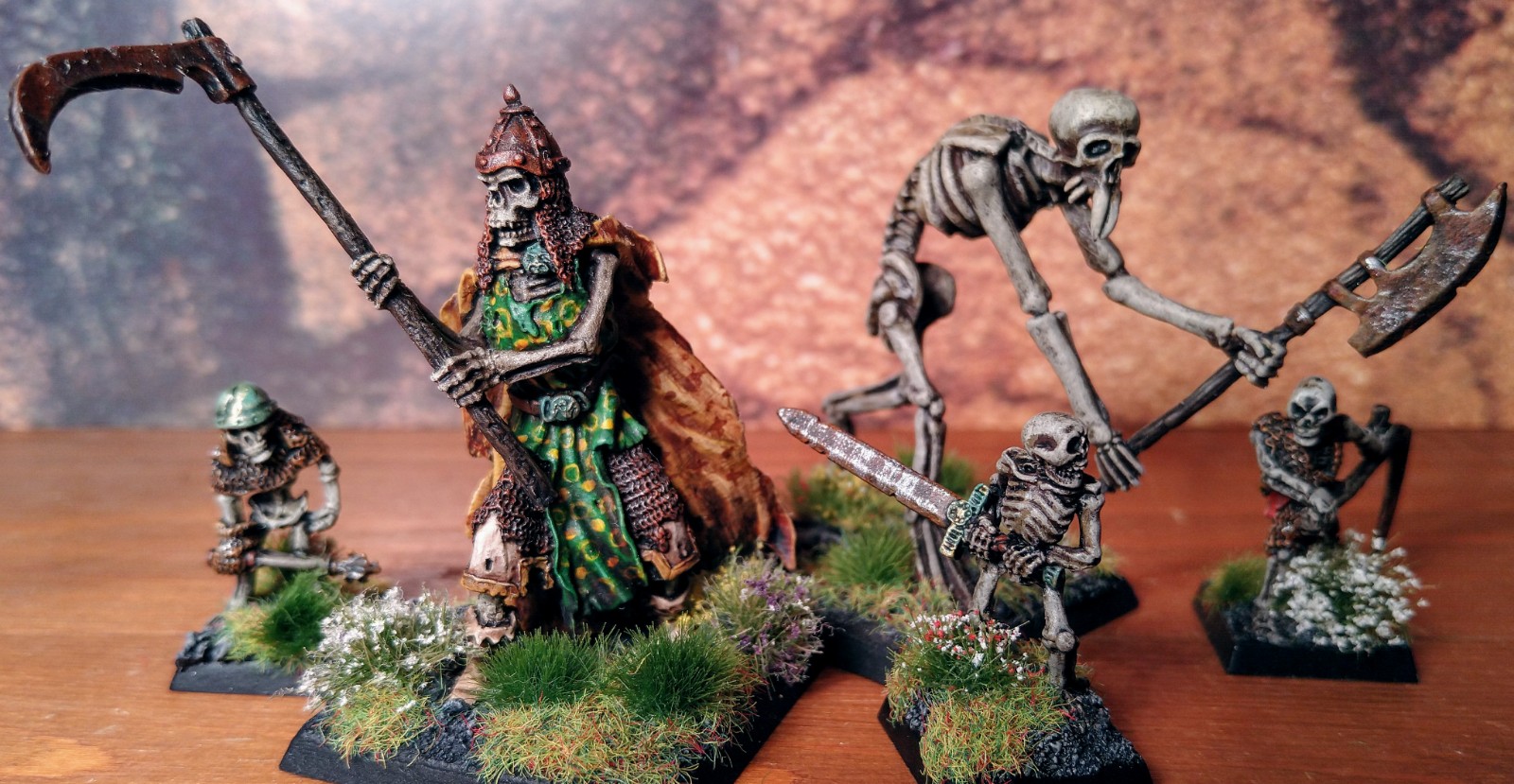 Next up is a Bob Olley undead giant from Ral Partha. I've had this model since middle school and painted him up back then as well. A strip job and a new paint job mixes him in well with my army. Next to him is a RAFM skeletal troll which is a welcome model to add to my collection of undead 'big guys'. Accompanying them are some Citadel skeletons and a Metal Magic skeleton.

Next up are some lovely oldies: pre-slotta C17 skeletons from Citadel (1984). Most of these are unnamed.

Another set of pre-slotta C17 skeletons from Citadel, led by Lord Krell himself (carrying an obsidian sword) and another copy of Finrum. I don't always like how a colour scheme turns out (as is the case with Finrum here) but I rarely go back and change it as I have enough unpainted models anyway.

Some more lovely pre-slotta skeletons and on the far right a shot of Krell's rear. I invested a bit more time in these models by adding more patterns and different colour schemes. I had enough quickly painted skeletens and I wanted more variation. Also, I really think these excellent models deserve an extra bit of attention (you can tell I'm a fan).

Next up are some recent models: an undead Chimera and Owlbear from Reaper (Bones). Accompanied by some newly painted skeletons (Metal Magig and CItadel) and a Grenadier necromancer. 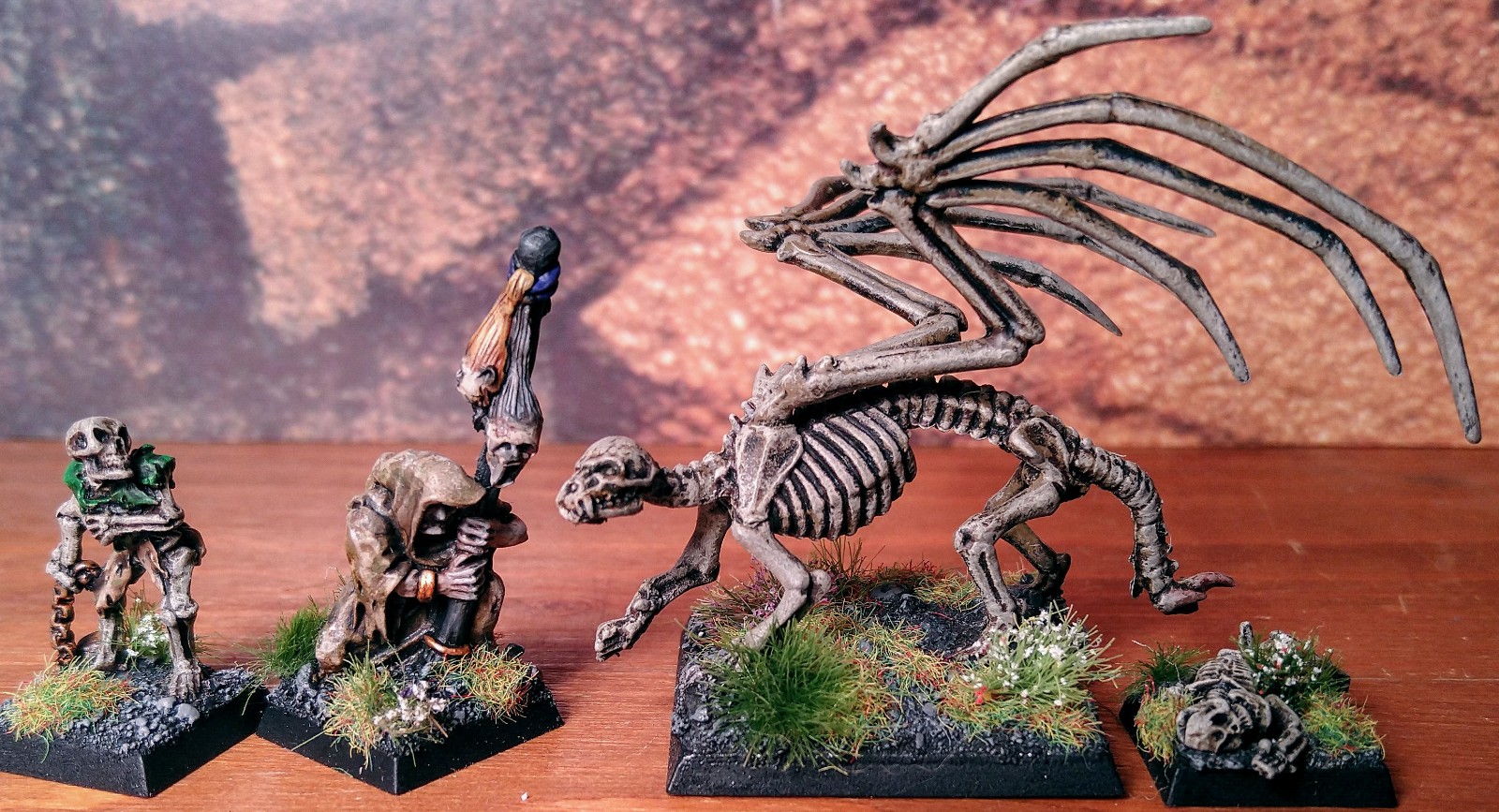 Another shot of the necromancer, an undead Manticore from Reaper (Bones) and another skeleton.

I already had a bunch of armoured skeletons painted but these models are fairly common so I had more to paint.

Some lovely zombie trolls. One by Grenadier (unfortunately the only model of it's kind) and one by Rafm. They are accompanied by a very cool liche model (from among the regular skeleton range) sharing the body of Morbius, a skeleton leader, a marauder skeleton and a skeleton samurai (one of the very few I have).

Next up are some special models to mix in with the horde and to use as characters. From left to right a BLood Bowl skeleton, a pre-slotta Citadel Lone Wolf Vordak and a limited Space Skeleton. 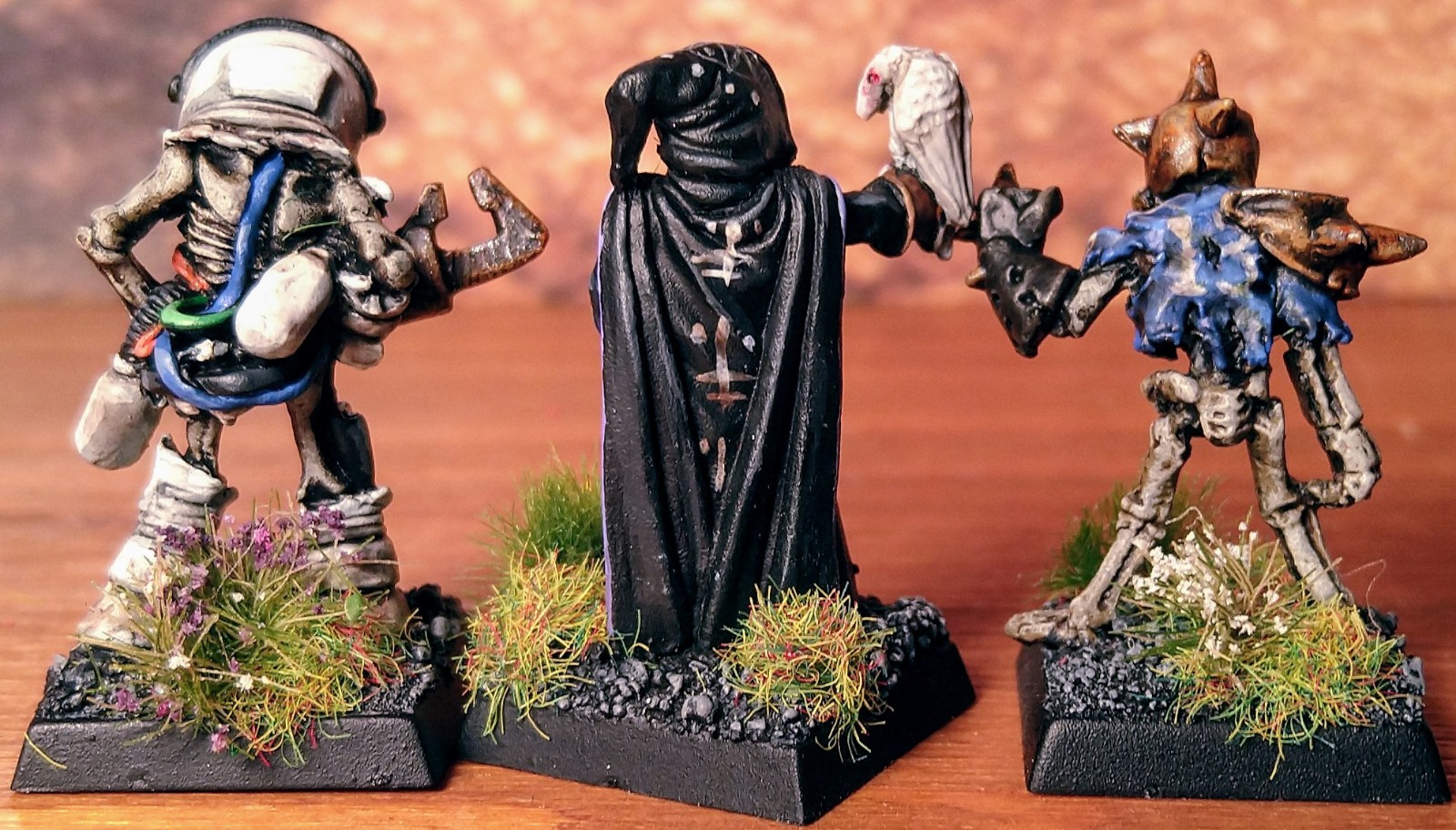 The rear of the same models. I think the Vordak especially is a fantastic model which I never knew until I got it in a lot, I think you can imagine my joy upon discovering such a wonderful piece. I wanted to make him look special and mystical so I painted the robe black with purple inside and lots of mystical symbols inspired by eastern European monks. 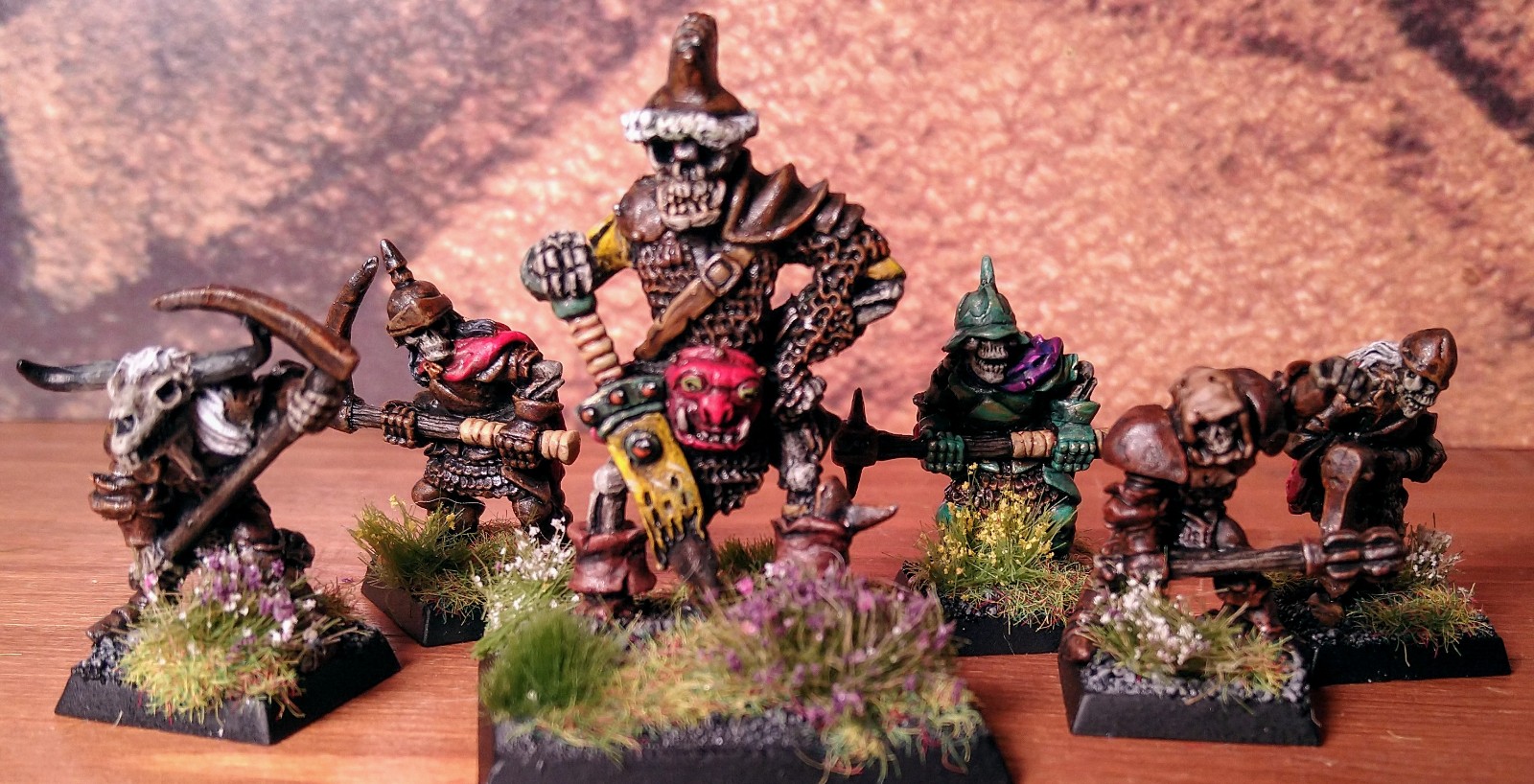 Undead Hrothyogg sculpted by Justin Coutange who sadly departed much too young this year. A nice undead rendition of a Jes Goodwin classic. Here he is accompanied by some armoured skeletons.

Here's a heartfelt post by Goblin Lee on his passing:
https://goblinlee.blogspot.com/2019/03/ ... tange.html

The ogre has been adopted by Ral Partha Europe. It matches well with the other two undead ogres they offer. I can't seem to find it in the webshop but if you contact them they may be able to provide it. 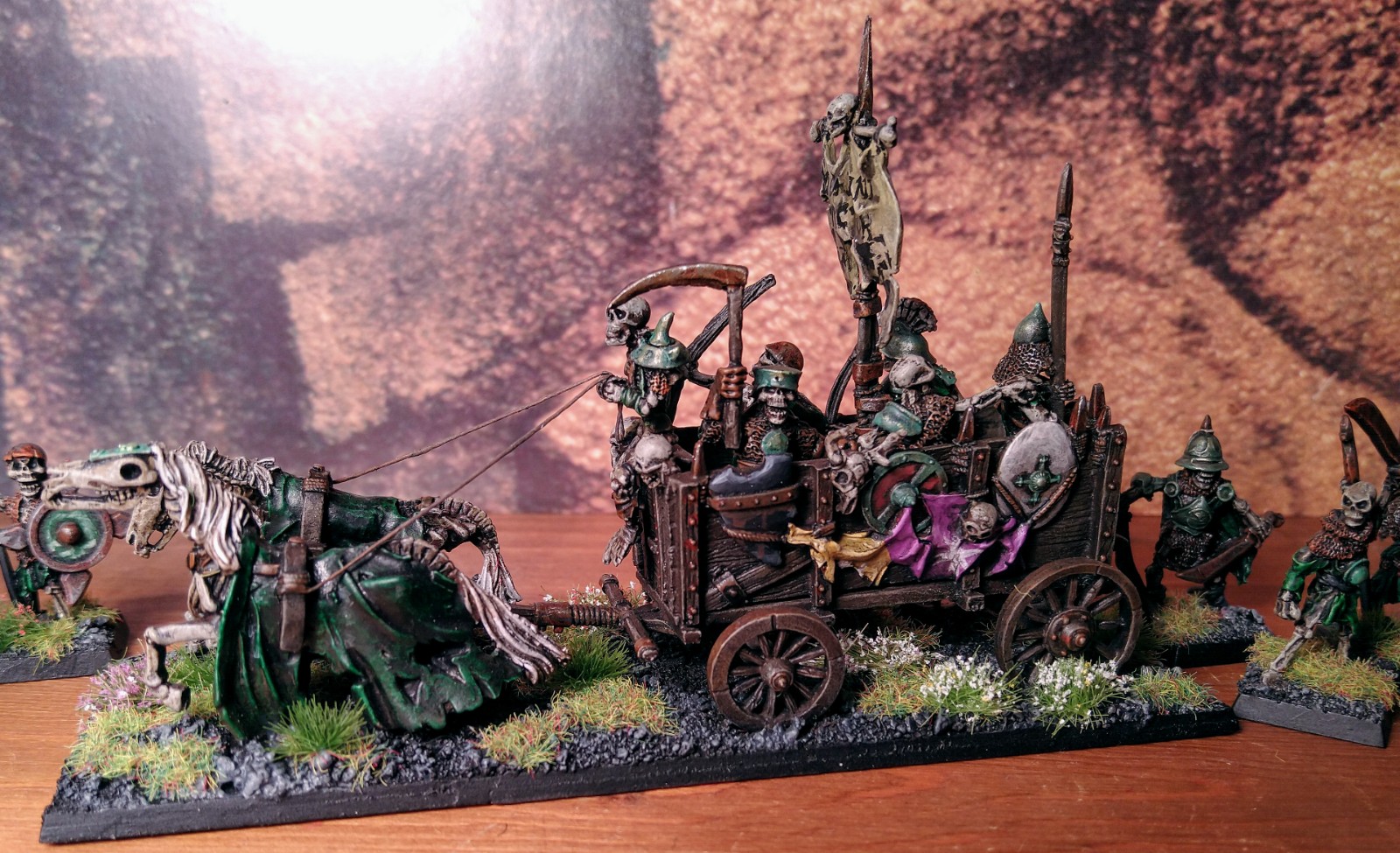 Feeling adventurous I placed an oder with Rafm this year as it seemed like the only way to easily get hold of a piece of their fantastic selection. On my want list was this great war wagon with three skeleton crew and which was supplied to me with eight wheels for some reason (four small and four large). I chose the classic setup with small wheels in the front and large in the back. 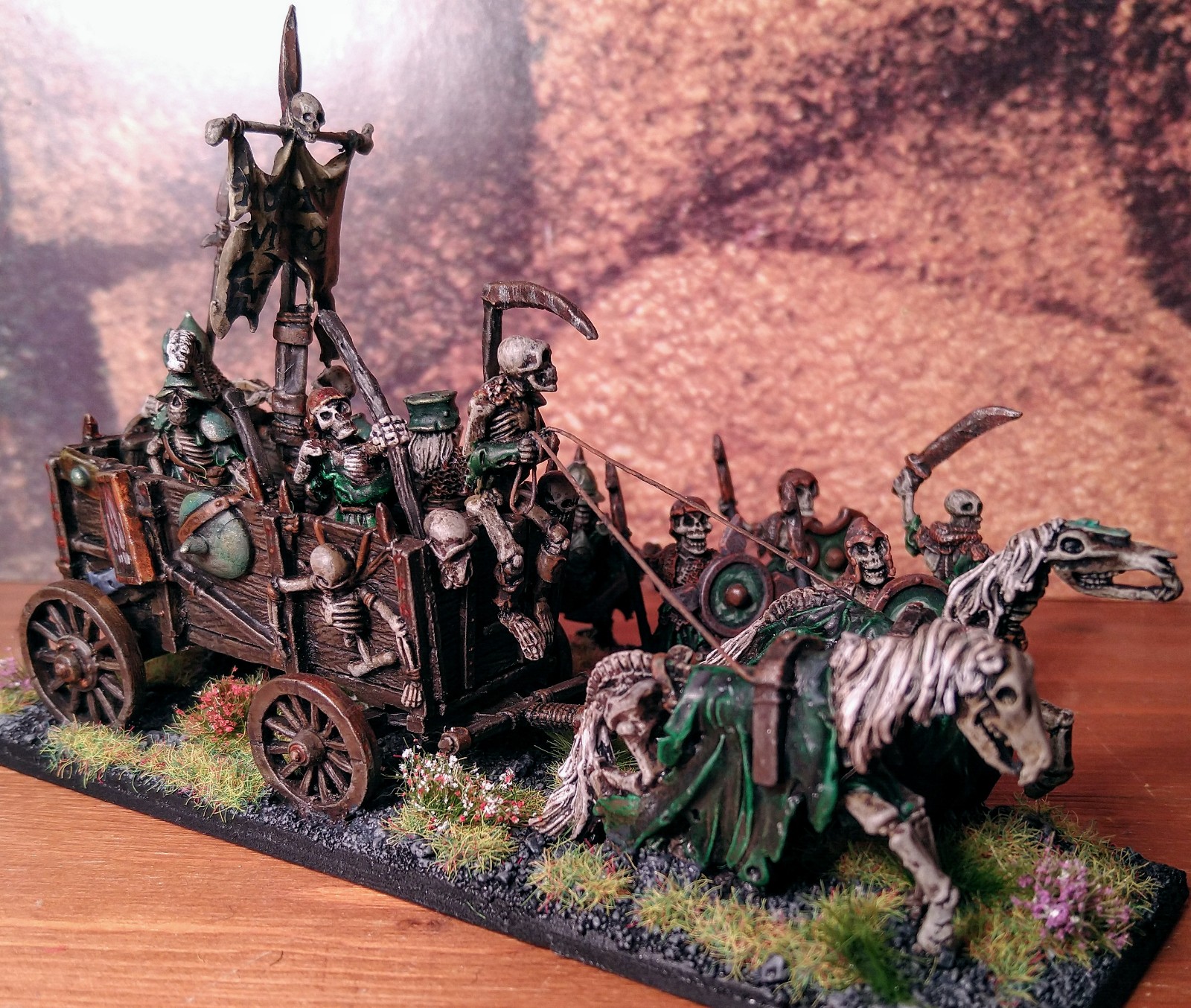 It was a nice piece but the wagon felt far too large and impressive to host only two skeletons Ithe driver was the third crew member) so I crammed in three more models for a total of five plus a driver. The extra crew are Citadel which also helps to tie this model in with the ret of my army, as the sculpting style of Rafm skeletons is rather different. I added a champion, an archer and a pointing skeleton from the skull catapult. 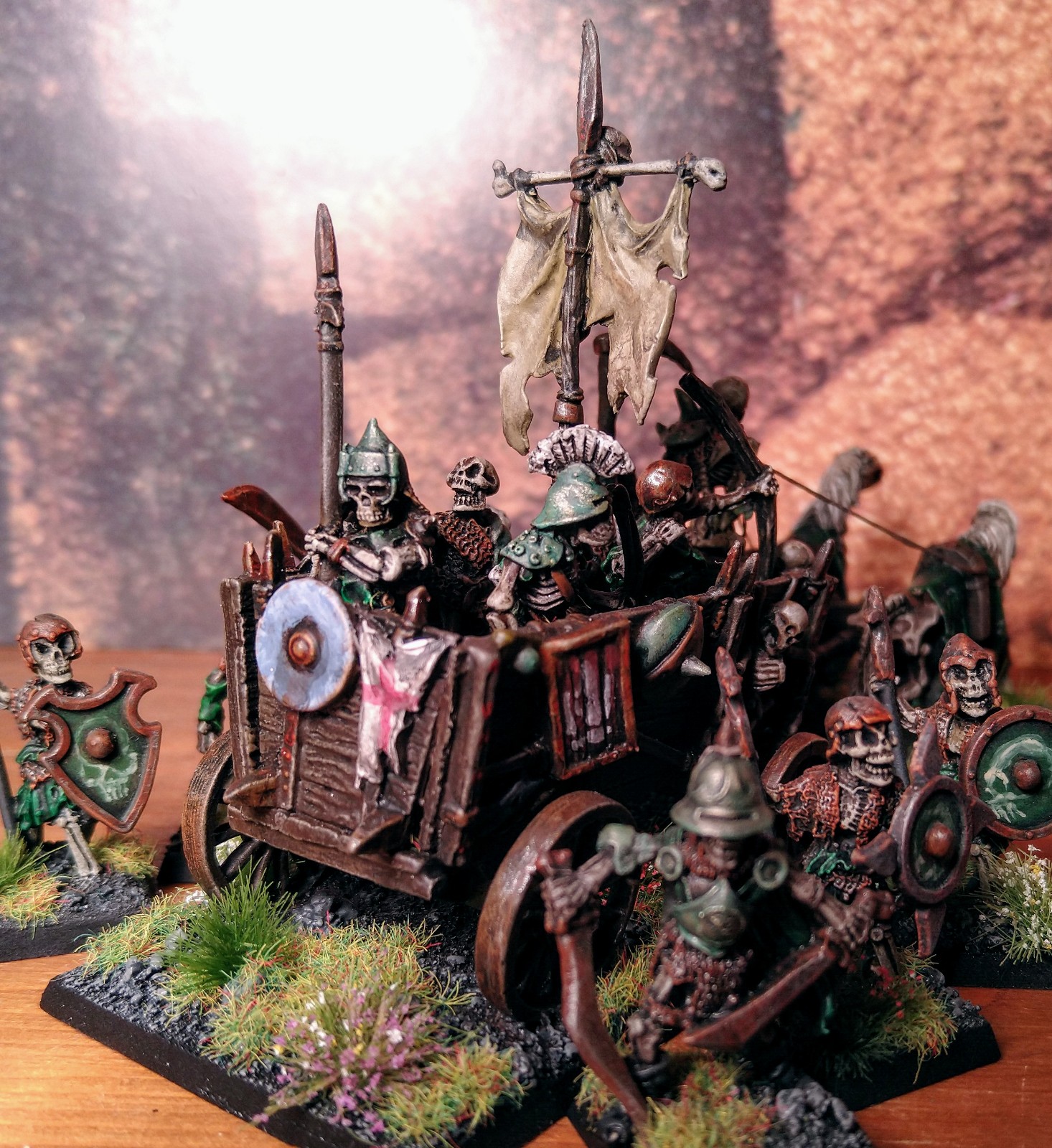 As I read more information about war wagons and carroccio's (which this model resembles to some extent) I became more and more sure that I should tie in the paint scheme with my Nightmare Legion. This also made painting all the clothing easier as I could just go for green. On the banner I wrote "MORDINI VICTOR" accompanied by two skulls. Unfortunately the banner pole itself is a serious weak spot of the model and bends at the slightest touch. The legionnaires are just for show and not newly painted. 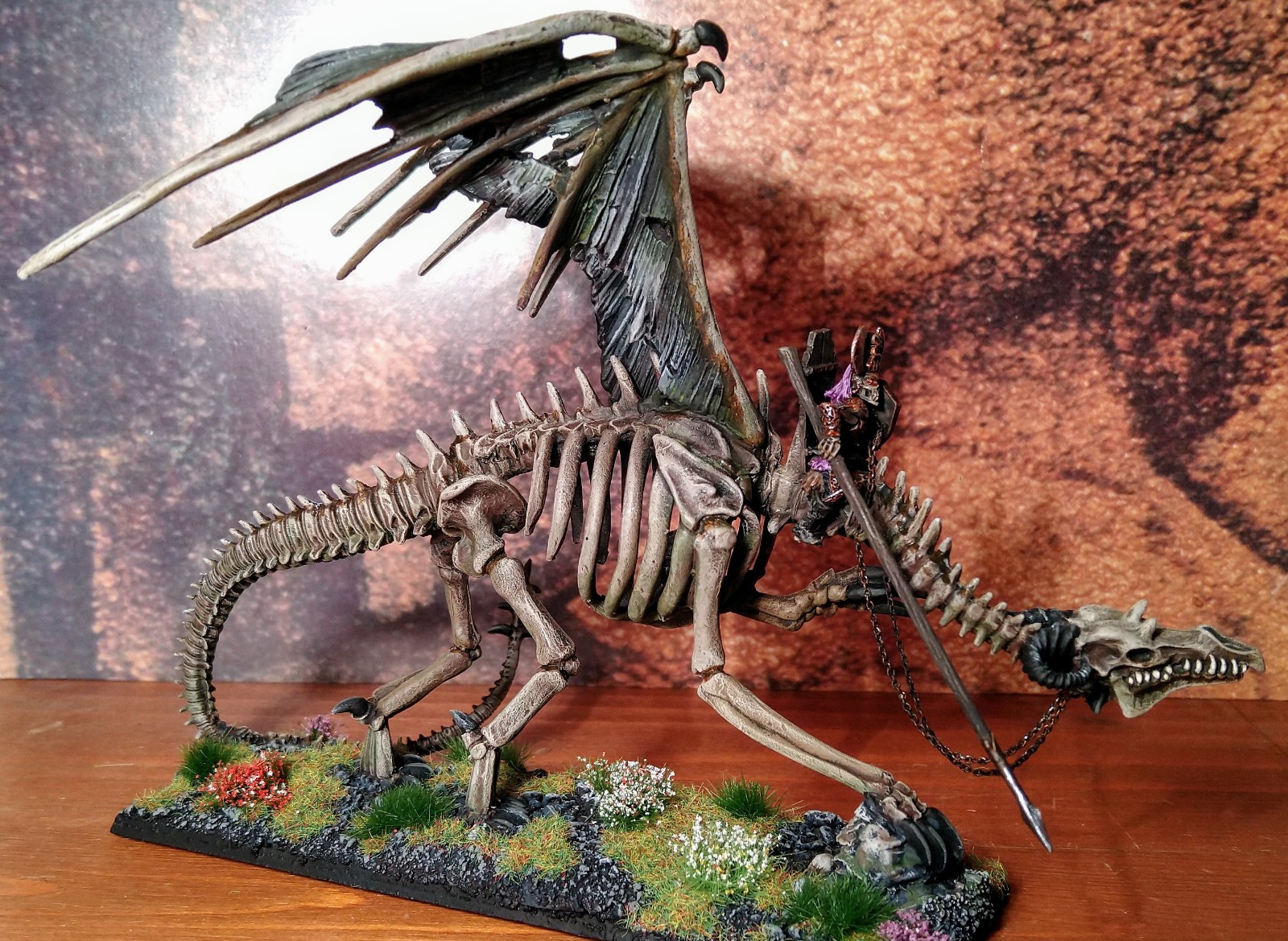 As luck would have it an accidental eBay search for Rafm undead also rendered up a copy of the OOP Necrodrake Dracolich, a model which I've had my eye on for years but which I didn't get at the time in favour of Reaper's Kaladrax. This dragon though is a fantactis and worthy addition to my army. 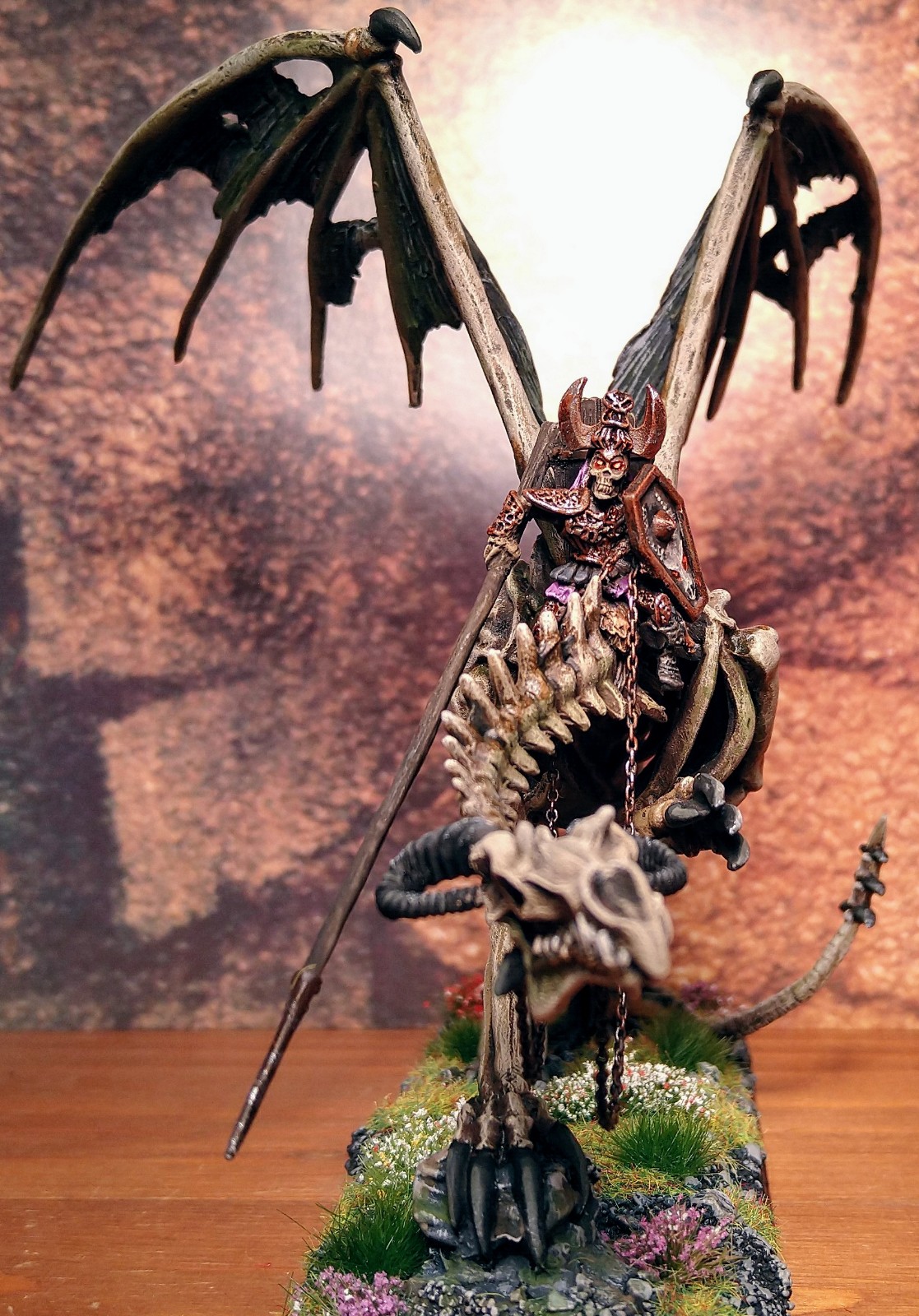 I didn;t want a host of skeletal dragons without riders though (I already had two unridden undead dragons) and I wanted more of a tie-in with my army so I selected Blood Harvest, an old Citadel Death Rider to ride him. I mounted him on a throne made from putty fur and a coffin lid shield (Citadel 1998). I also have him a long plastic lance to give him some hop of attacking an enemy from such a great disance. As luck would have is a previous owner had already cut off his scythe so no harm was done. I also added some chains and a coffin shaped shield to tie in with the throne. As a final touch a dragon skull was painted on the shield. 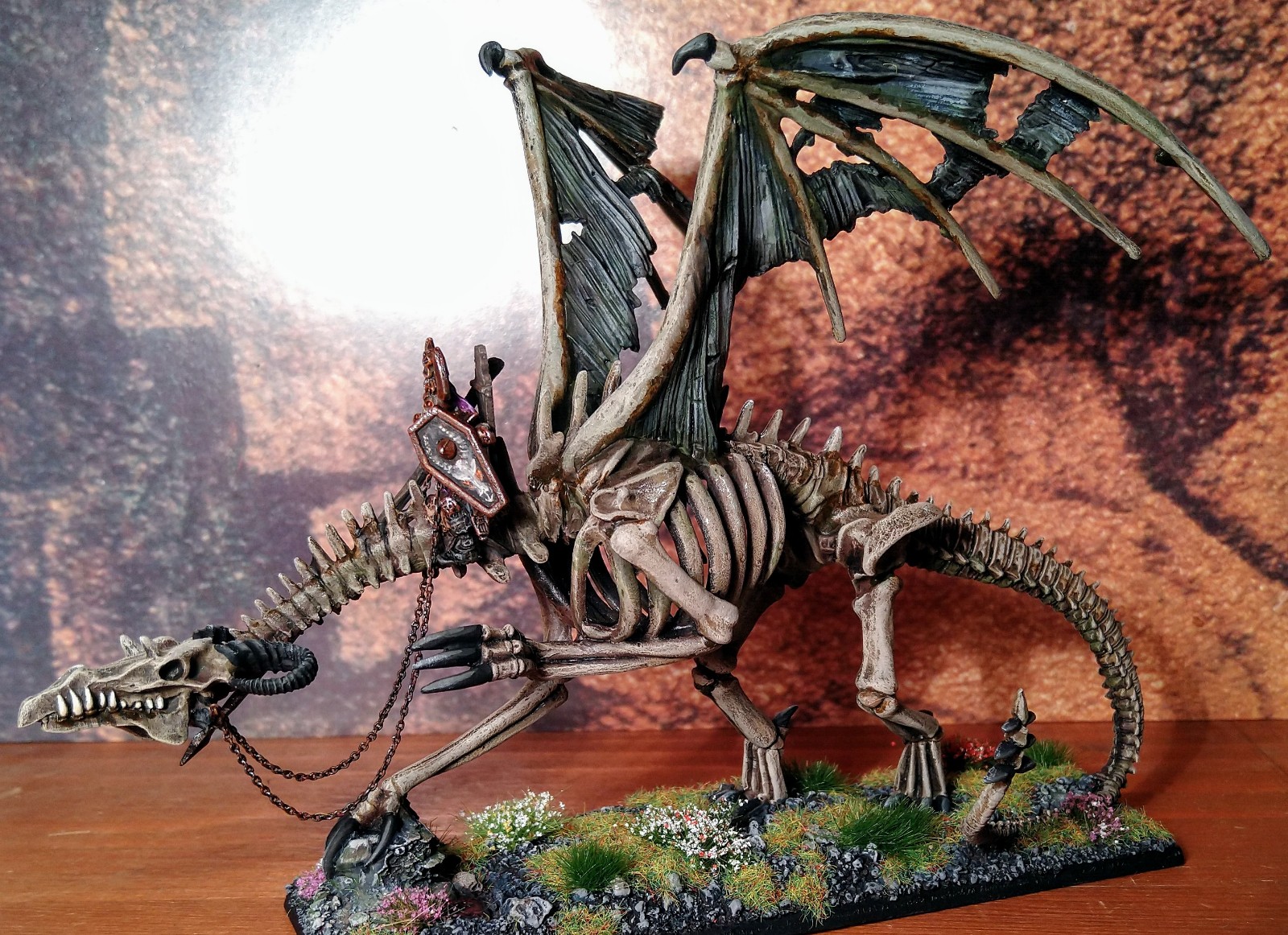 I mounted the dragon on a custon 50x150mm base and painted him with my regular bone recipe. To add colour variety and to emphasize his size I also added some weathering with green, brown and white. The other body parts were painted black to contrast and make him look more menacing. The ram horns also befit a black dragon I think.

Well, it's been a long post but now I feel I'm up-to-date with photographing my undead. There will be more to come for sure but for now please enjoy this

Lovely patterning on the clothing, really brings those old skellies to life!
Love the tartan wights.
Nice basing too, those old bones must be good for the garden!
De gustibus non est disputandum

Lovely work all-round, on those

It's not something I would normally comment on... but the cloth patterns and the overall unity of all the miniatures is very nicely done

.
Have a look at my blog, it's really full of things: http://insosworld.blogspot.com/

Damn fine work all round.
Look at my blog!
Buy Noggin the Nog minis and more!

'Beautiful' may not be quite the right word but these are lovely.

I had a horde of unpainted C17 skeletons from the 80's that I sold in the early 90s. I really wish I hadn't done that.
Pimping my blog at http://dereksweetoys.com/

Why not put together a spreadsheet on what you had, post it up, and I'm sure someone can help you hunt them down?
Actually, you've probably already got a spreadsheet on that, haven't you? After all, you like to keep informed about everything, in a nice orderly, detailed, autistic-like, fashion, eh?

Users browsing this forum: No registered users and 10 guests