I had the first two or three hundred 2000AD in a box, until me dear mum chucked them away when I was at Uni. Somewhere in Tyneside an ex-binman lives in a palace full of nubile hand-maidens with bejwelled clits, built on the proceeds of the stuff my dear ol' mum used to chuck out when I wasn't looking.

Anyhooo.. I was reading an article about something else, which referred me across to 'Action' which of course led me to 'Hook-Jaw' and finally to 'Shako'. I looked him up, god it must have been tripe - your standard 'Giant Polar-bear that swallowed a capsule of top-secret nerve toxin and is pursued by the CIA while eating people a lot' story with art by whoever wandered in off the street and brought his own crayons. Ace.

What other early 2000ad stories have I forgotten about because they never became cool? 'Flesh' was borderline good, like that but worse - I remember a colony space-ship that crashed on a world where everthing was hostile - 'DeathWorld' with more casualties, obviously. any other stinkers?

Edit, fuck, how could I forget 'Fiends of the Eastern Front' ???? That was both shite and ace at the same time. 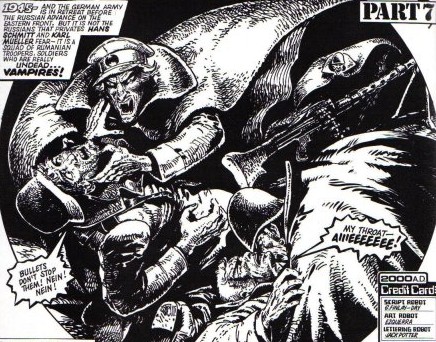 Nein! Nein! Nein! I doubt the Rozzers will be of much assistance to you Fritz!

Invasion
Cockney cunt kills Russians with a shotgun. The stories were terrible, all rejected by Battle and Commando. (The re-boot was okay for a while)
Mean Arena, Aeroball & Inferno, Mach zero

Steders wrote:Invasion
Cockney cunt kills Russians with a shotgun. The stories were terrible, all rejected by Battle and Commando. (The re-boot was okay for a while)
Mean Arena, Aeroball & Inferno, Mach zero

"Invasion! was indeed awful, but it wasn't Russians he was killing - it was Volgs. Did that strip invent Volgans?
"Mean arena, Aeroball, I remember, don't recall Inferno. But Mach Zero was quite touching, in a way the piss-poor Mach 1 was not. And yes, the Dan Dare artwork was quite trippy.

Now, what was the one where he ended up in a alternative dimension peopled by animal-human hybrids? The artwork was Italian, maybe redondo rather than Ballardinelli? That was simultaneously shit and good.

I liked Invasion. I have never forgotten the image of Savage literally kicking a Volg out of a tank hatch. Hey, I was 11.
When I die I want the Arsenal players to lower me into my grave so they can let me down one last time.

Sane Max wrote:
Now, what was the one where he ended up in a alternative dimension peopled by animal-human hybrids? The artwork was Italian, maybe redondo rather than Ballardinelli? That was simultaneously shit and good.

Meltdown Man? Belardinelli, who was also responsible for Ace Garp which was just shit.
Ant Wars was shit as well. And The Visible Man.
What was the one where the hero was immortal and was hunting/being hunted by Satan. Or something like that. The baddies turned him into a mutated mess (immortal but vulnerable) and then encased him in concrete to get rid of him. Mental.

Mean Arean, future football played in abandon cities, some kind of sub-plot going off but can't remember for the life of me what was going off... Chopped of in full flow, one week away at the Oxford Invaders, next week done???

I liked Harry 20 on the High Rock, a prison escape strip, written by Alan Moore, nothing groundbreaking but it was well written with a twist...

Yes, that's the one!

[quote="Sondergaard"] Belardinelli, who was also responsible for Ace Garp which was just shit./quote]

Thank fuck, I thought I was the only one who hated Ace Fucking co. You can't blame Belardinelli really, he just drew the piccies.

Now, I was very fond of 'The V.Cs'. a Proper Space War series.

We put on a game based on Fiends on the Eastern Front at Claymore one year in the early 2000s. The look on the faces of the crusty old grog bards as we put the zombies on the board was priceless.

I loved Fiends of the eastern Front, it was like my two favourite comics had combined (2000ad and Battle) drawn by the quintessential 80s artist. The V.C.s, Bad Company and Zenith were favs as well. But my all time favourite was probably the early Robo Hunter stuff.

broney wrote:You weren't there man! How many stiles are there on the Offa's Dyke Walk? You don't know Man!