A game we played last Saturday.
The pre-Gaelic name of the river Forth doesn't seem certain, we follow some scholars who suggest "Voritia".

There were 5 players and a GM. This adventure is a sequel to a campaign, (slowly) running since ...nearly ten years, often with the same characters, or their heirs or other relatives after them, appearing again and again:

- "Drustan map Fergus" a British sub-Roman leader. This time he is guarding an old tower on the coast, and must raise alarm in case of an Angle invasion; he knows that the garrison is too small to defend the place for long.
- "Aelfric" an Angle chieftain who has no future in Angeln (Denmark) and wants to settle in this part of Britannia where his uncle Eowin is already installed (Eowin has been killed in a previous game, it was the same player, supposed not to know what happened to him). He will be looking for three standing stones in a line indicating the direction to his uncle's settlement.
- "Marwena" a noble sub-Roman British lady, whose son married Gwennin the daughter and heiress of late Pictish petty king Talorc (this player has both roles and also runs the villagers). Gwennin still has no children and it's very worrying for Marwena.
- "Galanan" a Pictish chief, also a son of late king Talorc, who did not inherit the title of his father and is very unhappy about it. He wants to raid the nearby villages to increase his fortune, and/or to get rid of Gwennin if possible.
- "Tegwen map Gaius" a British sub-Roman officer (son of a Roman officer). His job is to come and help coastal forts if alarm is raised. 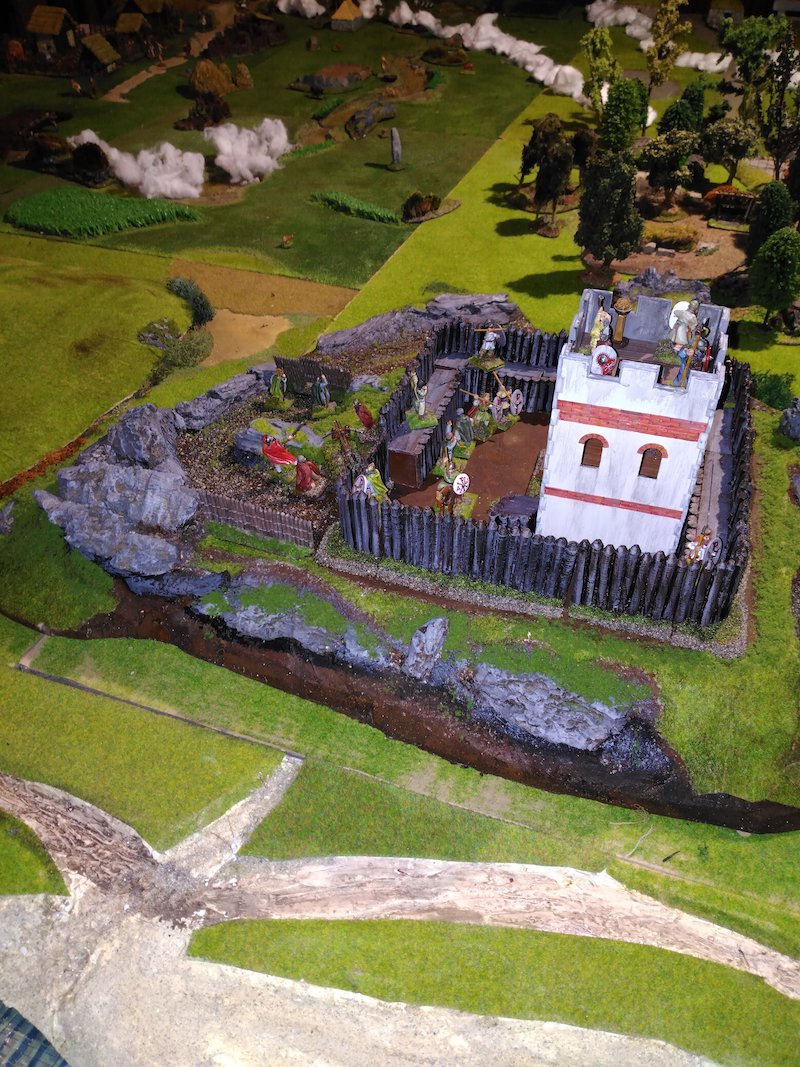 Angle ships come near the coast (in fact the third one is delayed and will arrive later). 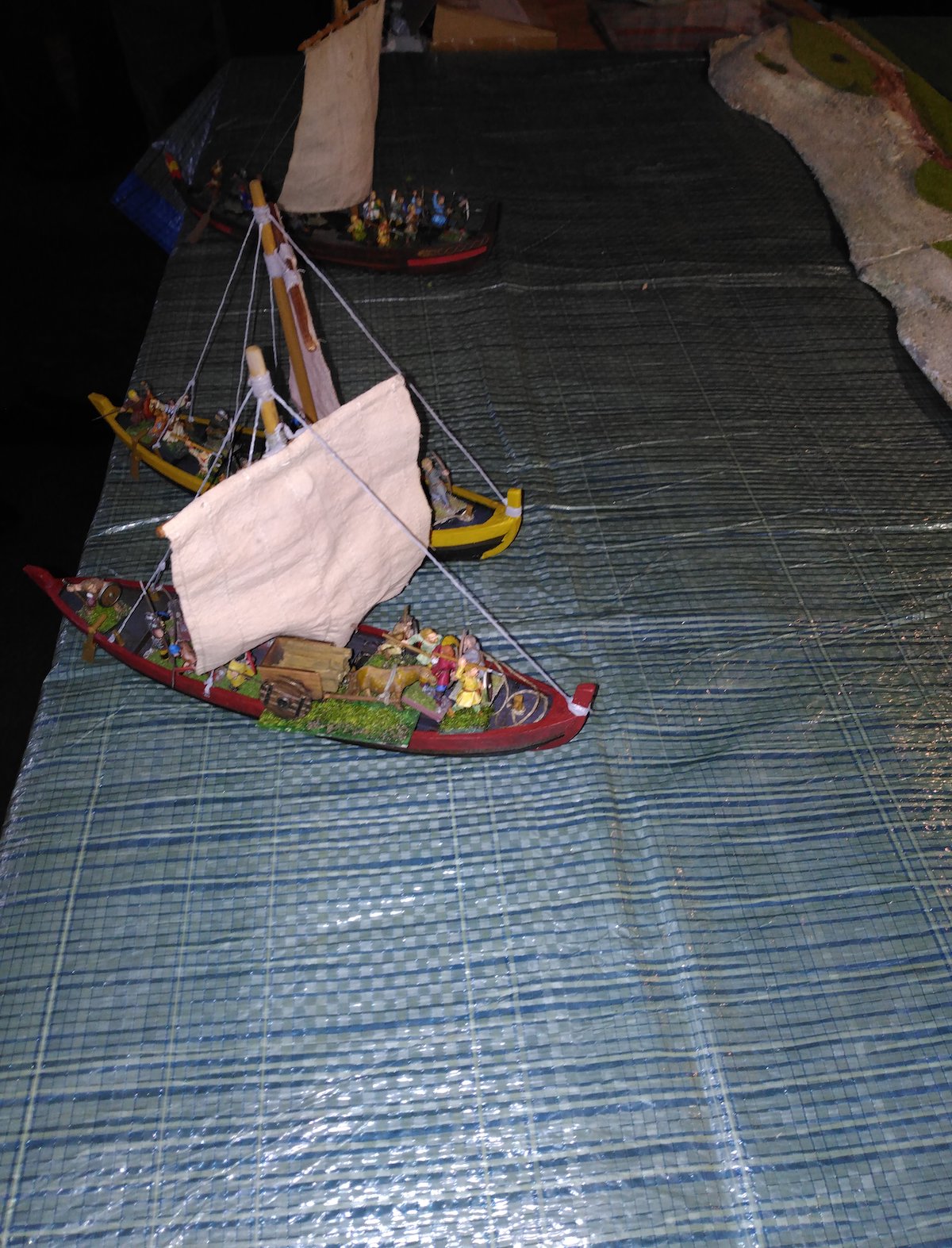 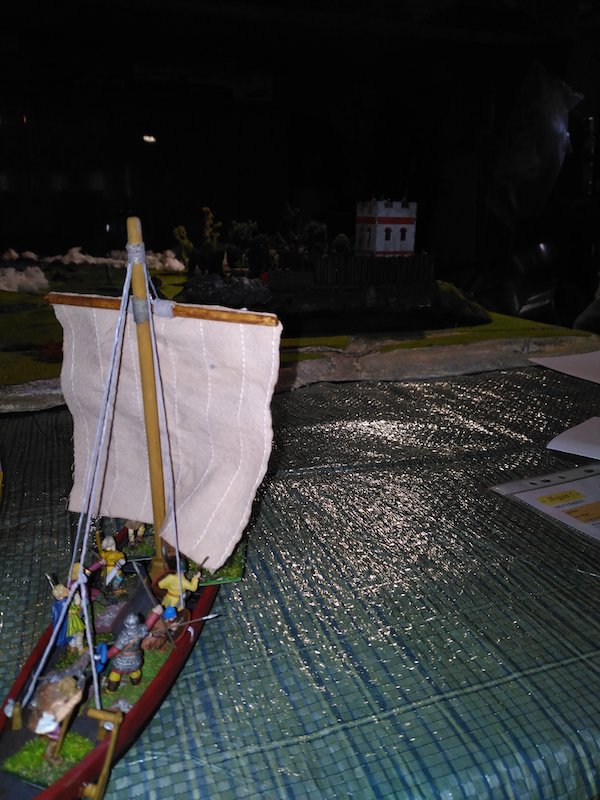 The two first ships have reached the beach: 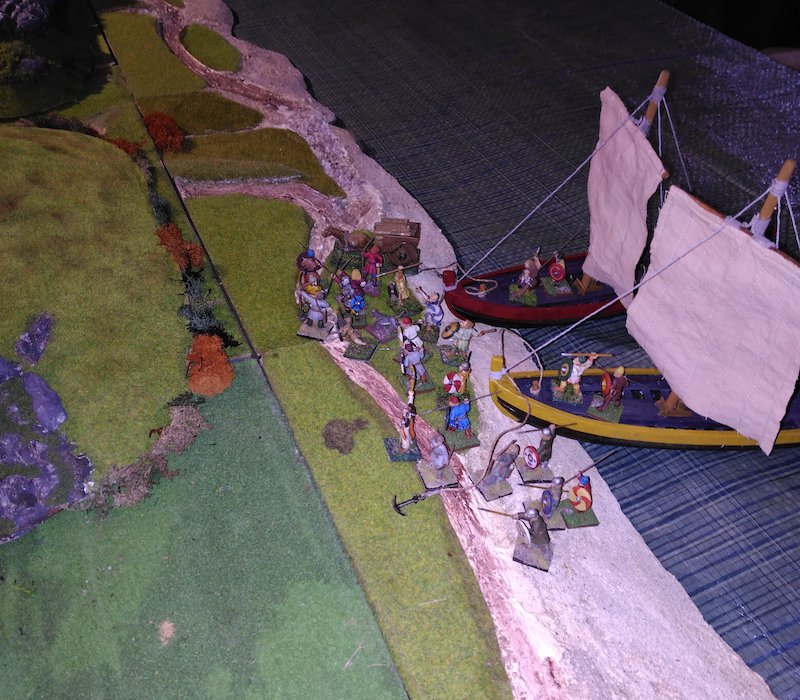 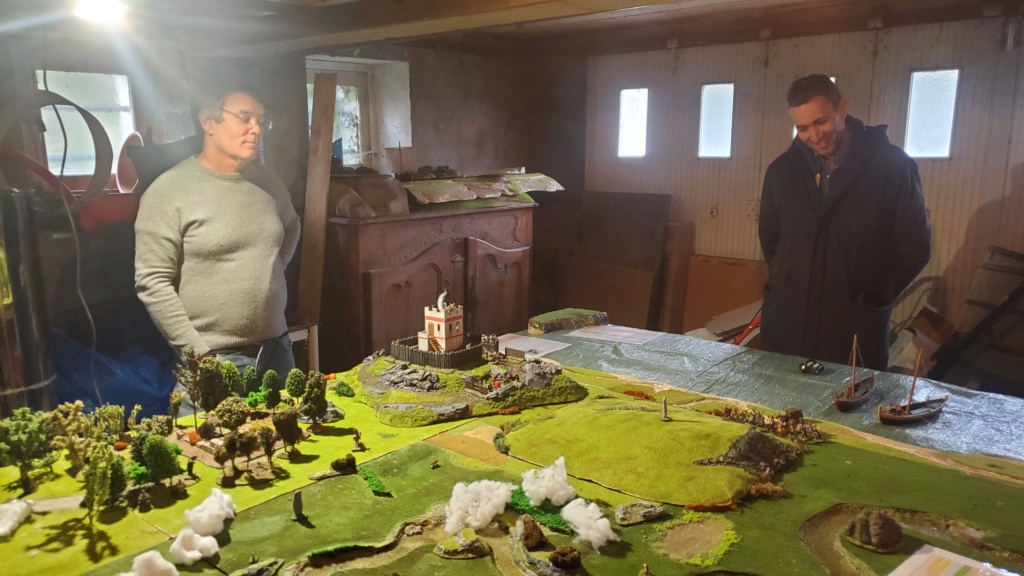 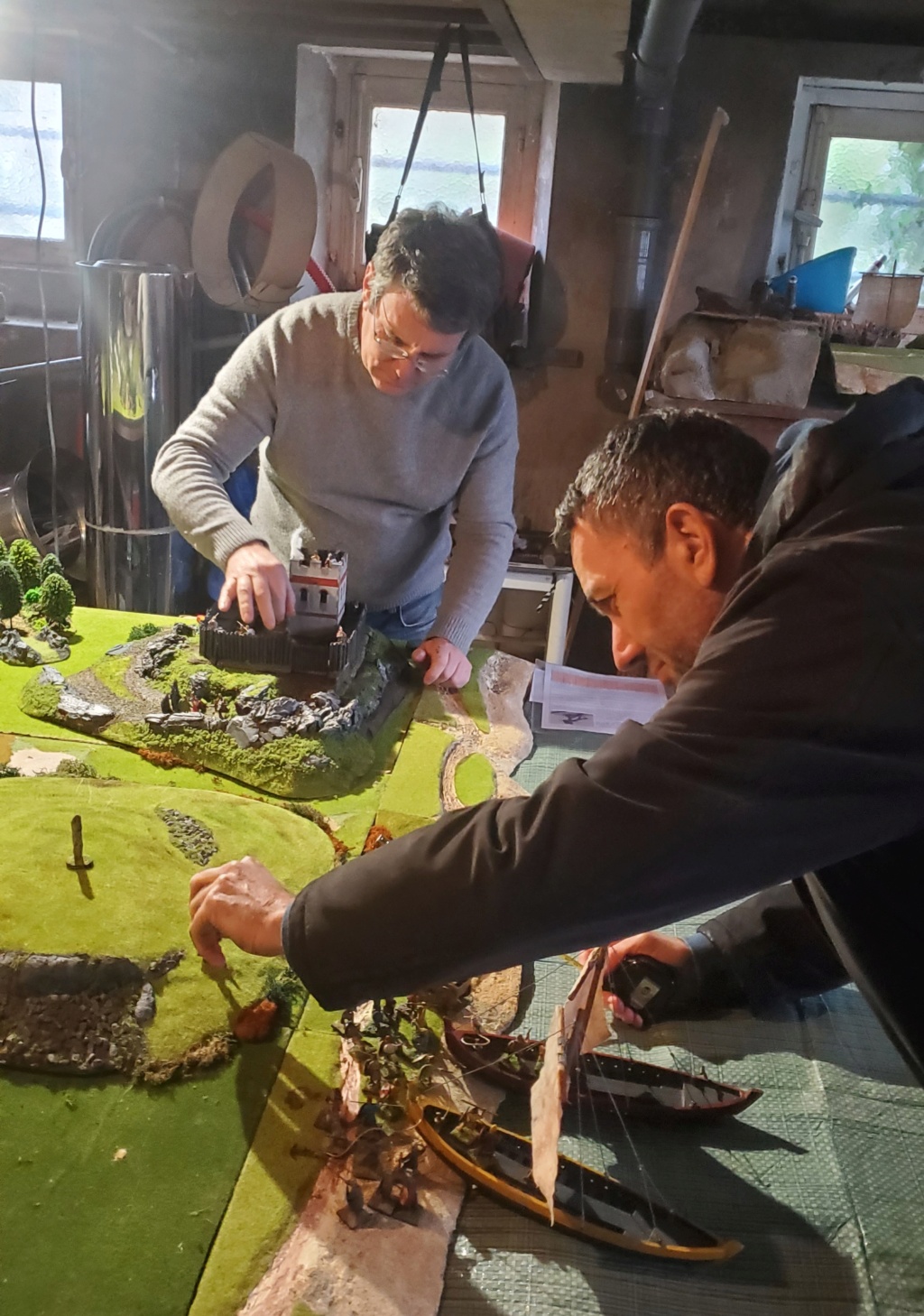 Aelfric has found the first standing stones, but cannot see the others farther inland because of the fog.

Drustan lits an alarm fire on top of the tower ...and his ballista shoots at the newcomers. Aelfric's men were not expecting this so soon and at this range, one of them is killed. 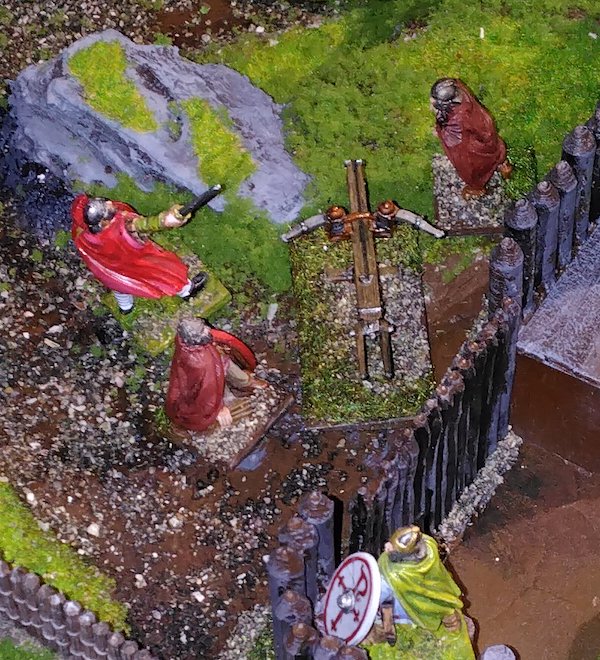 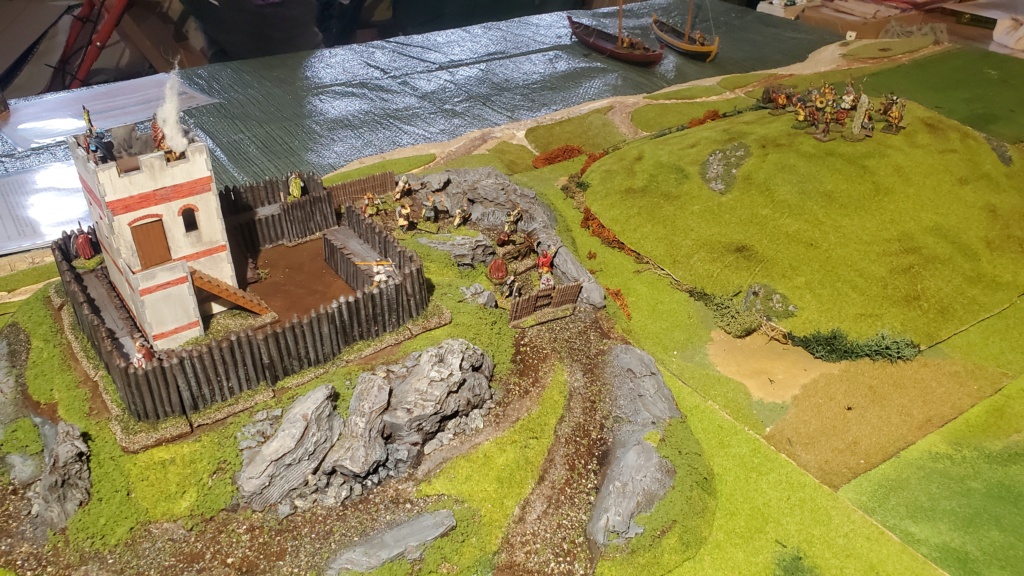 After some mumbling that he just wanted to come in peace (which make Drustan laugh) Aelfric moves his troop towards the fort.

At the other end of the valley, Lady Marwena with her daughter-in-law and a small escort is travelling through the village. 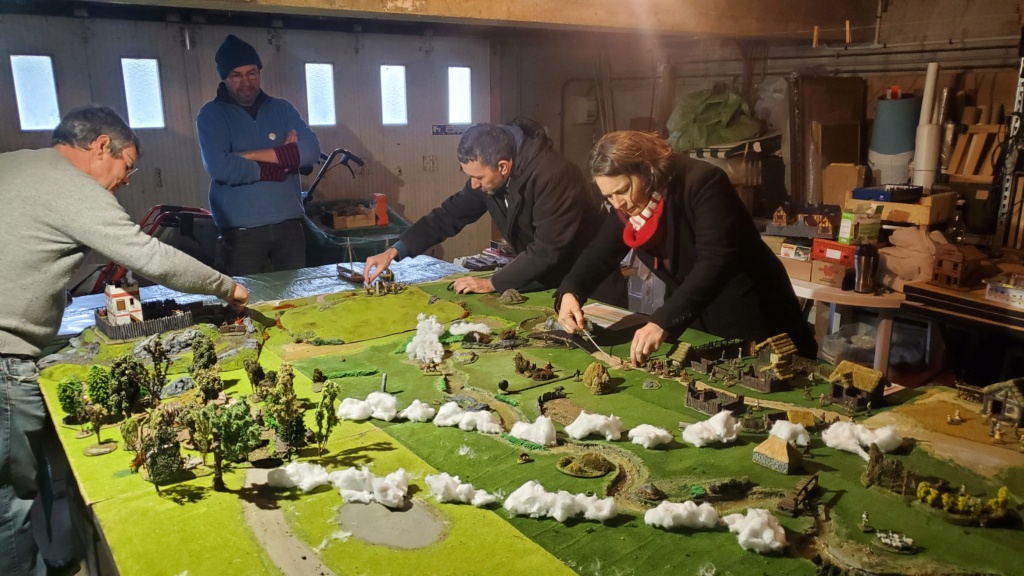 After some random time, Tegwen map Gaius and a rescue troop come at full speed along the same road which leads to the coast. Tegwen's men seem to despise the villagers and are reluctant to stop to talk with them, they have no time. 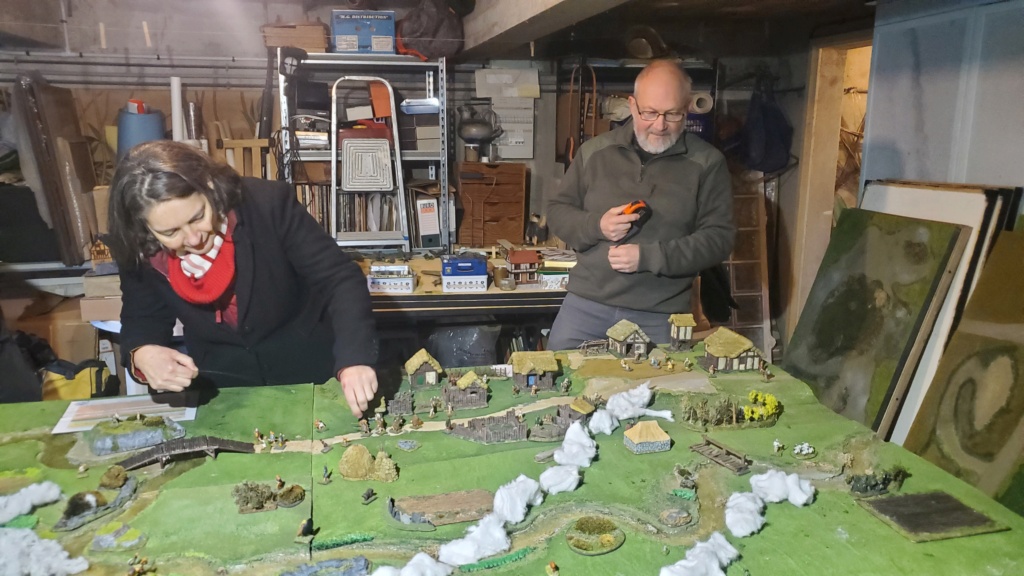 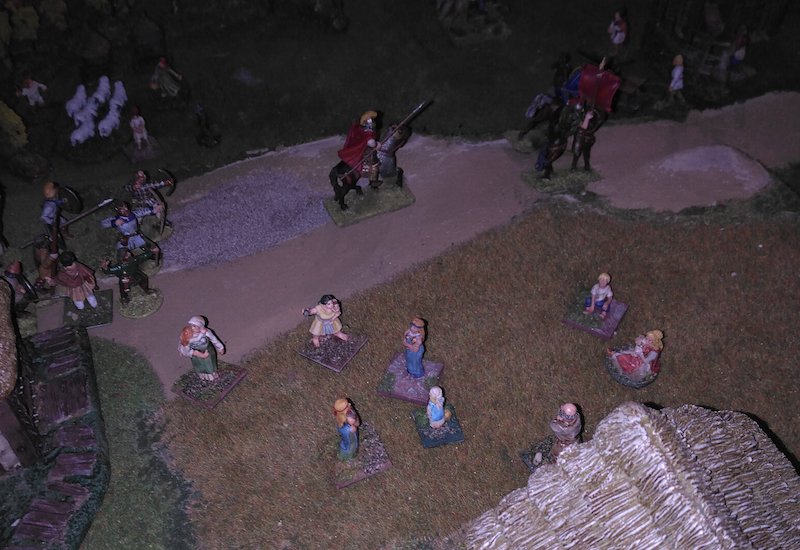 Walls of fog prevent them from seeing another troop coming towards them... Galanan's Picts riding to the sky! 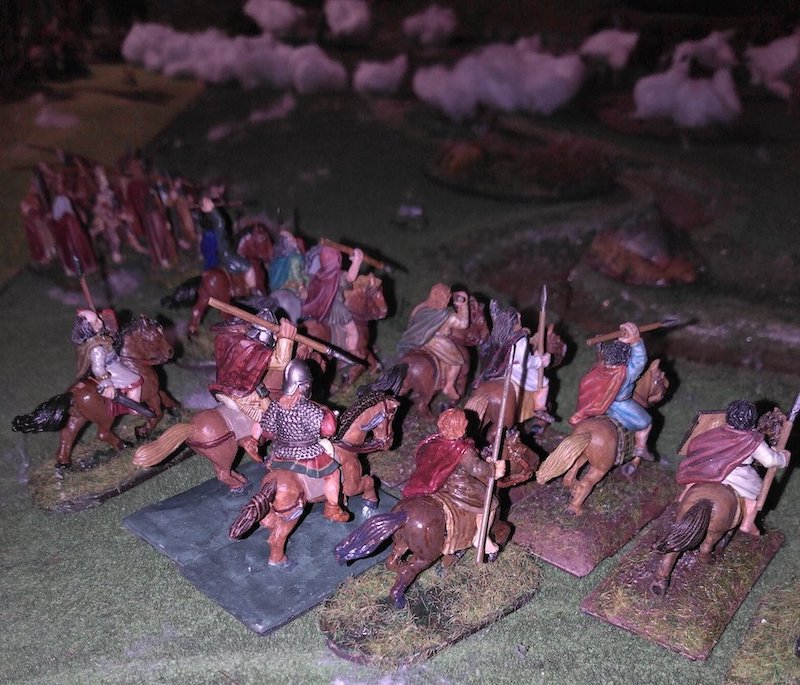 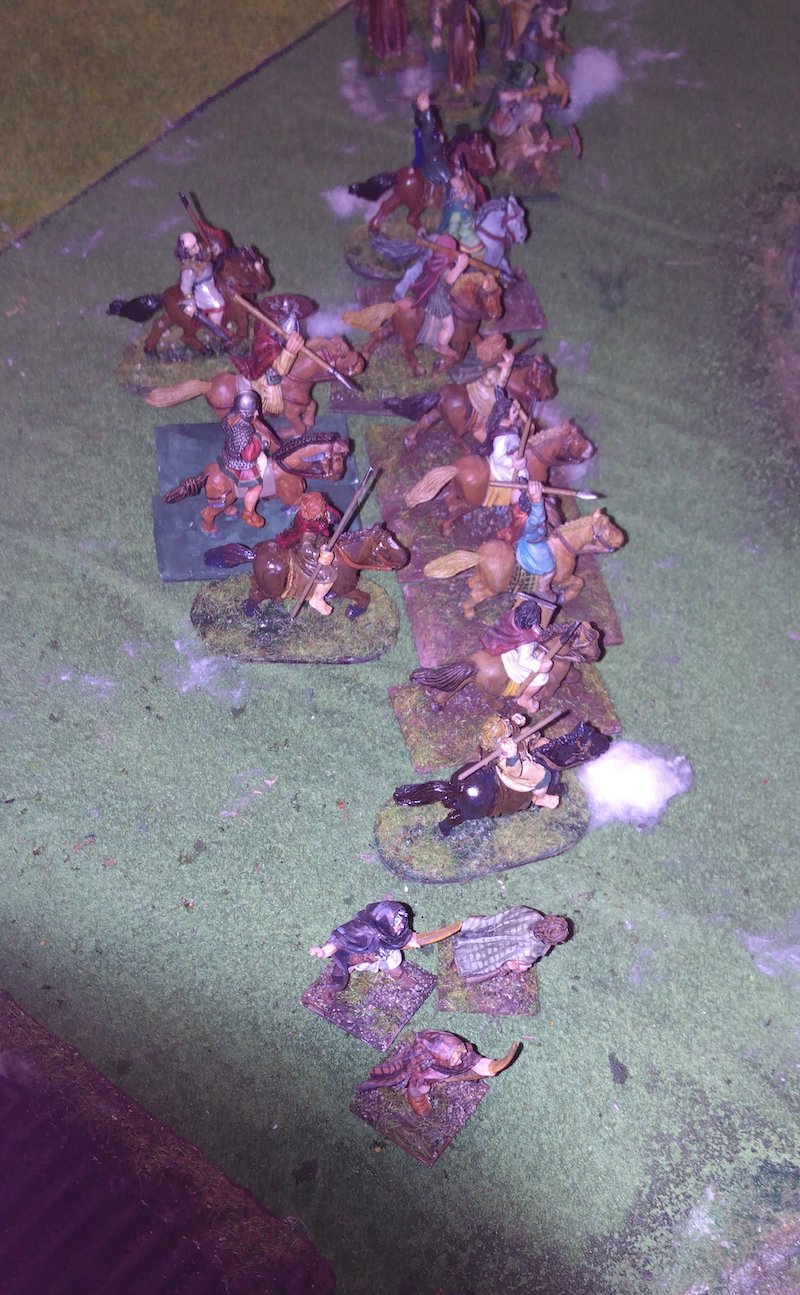 When he can see them, Tegwen understands that these Picts are not friendly. Half his troop is already far on the road, he stops his rearguard to face this new threat. Galanan, who had expected him to leave the village soon, is not happy either, he must now fight these soldiers if he wants to take booty. 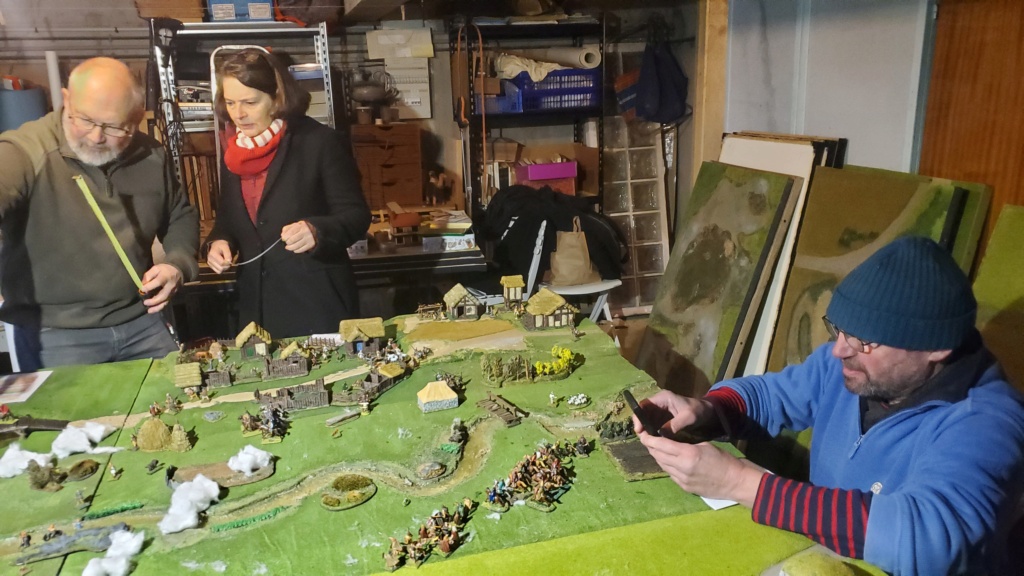 Picts on foot attack on the left, while mounted Pictish noblemen cross the small stream on the right. 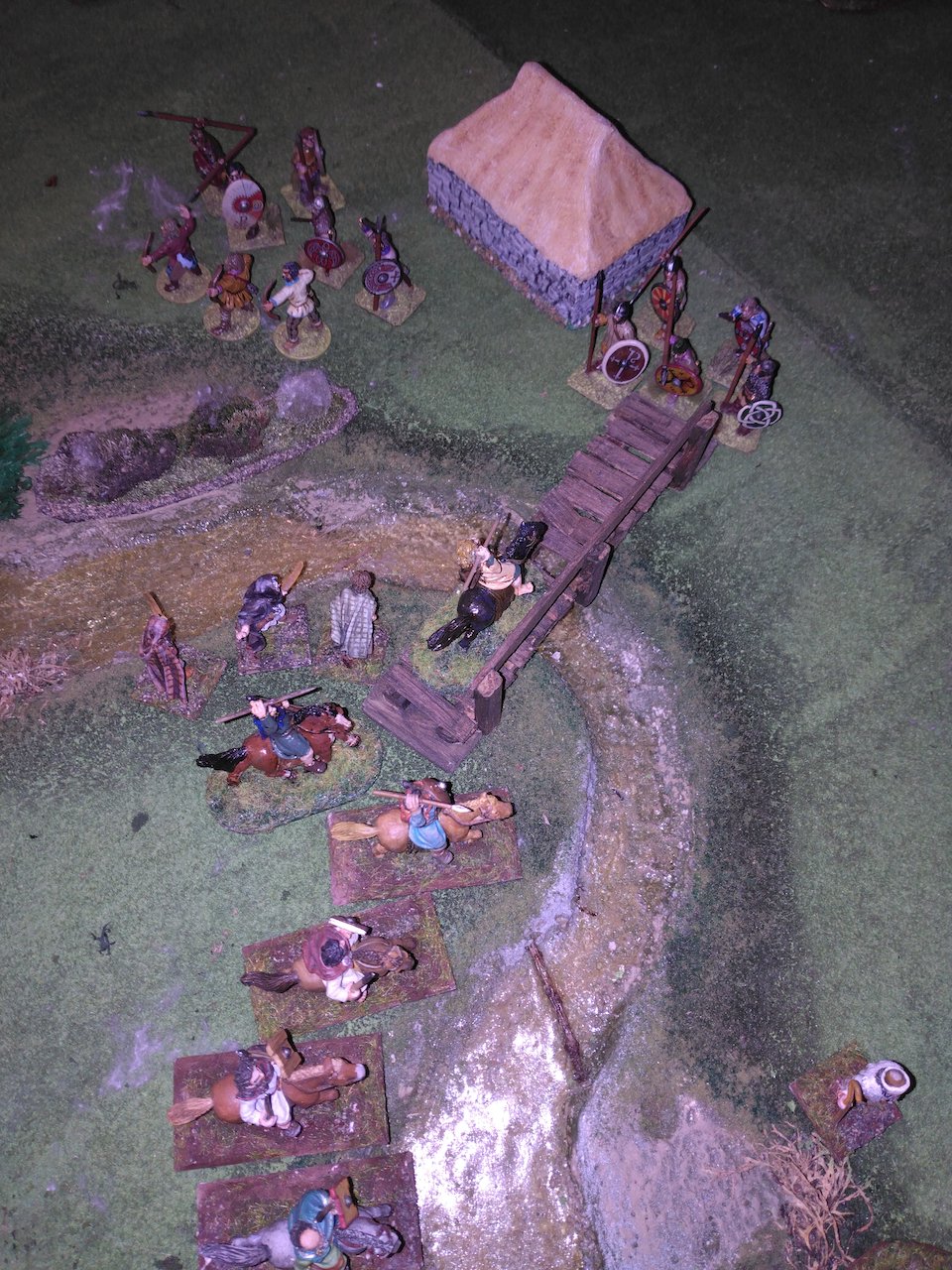 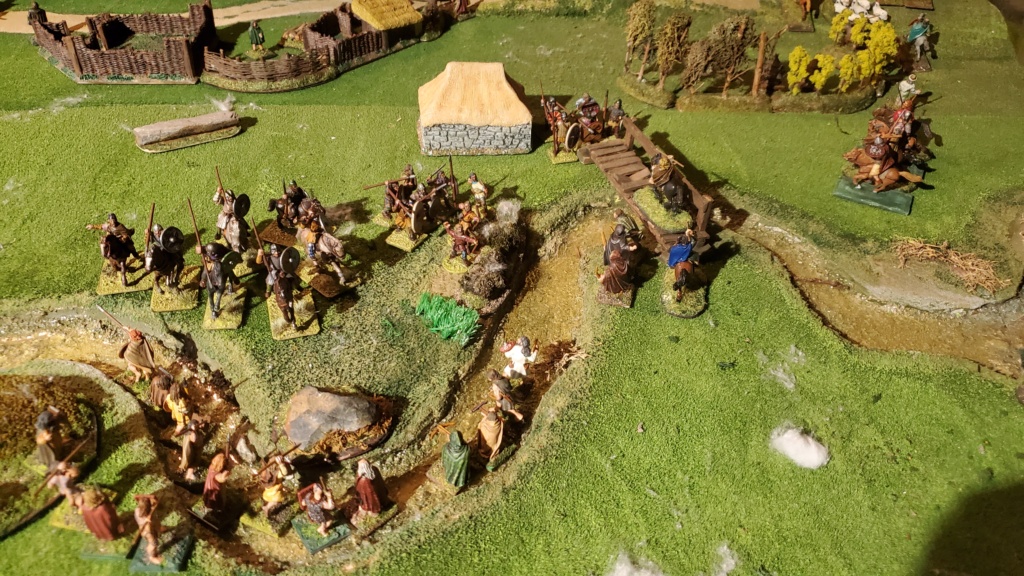 Meanwhile, the third Angle ship had arrived and Aelfric's troop now clearly outnumbers the defenders of the fort. 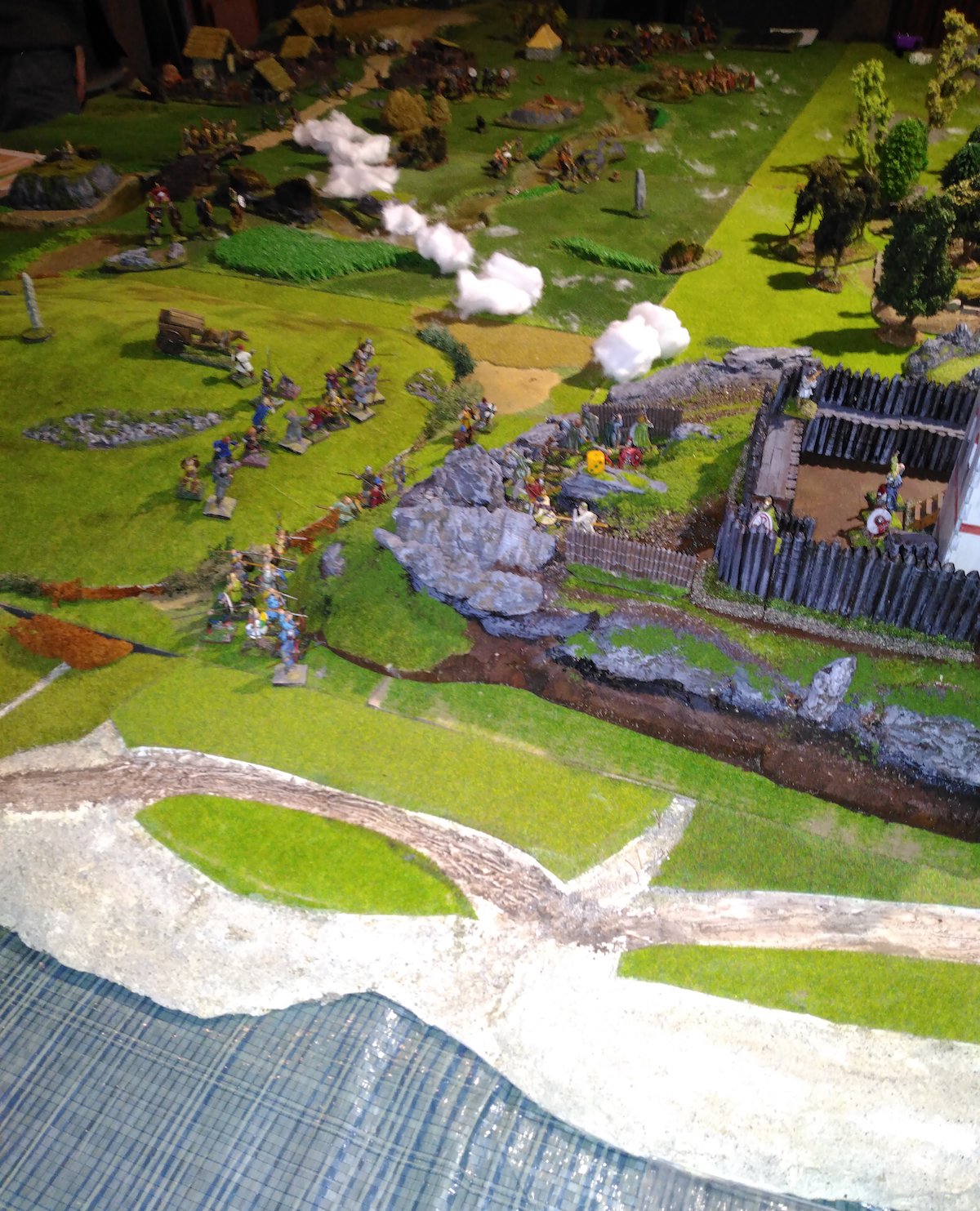 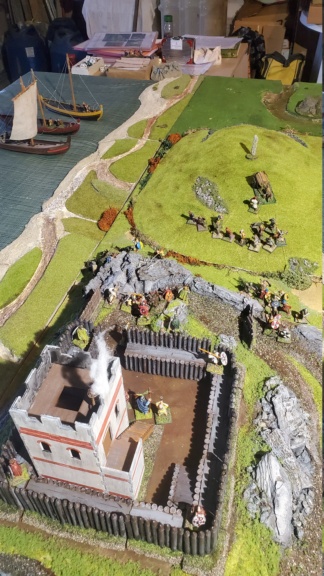 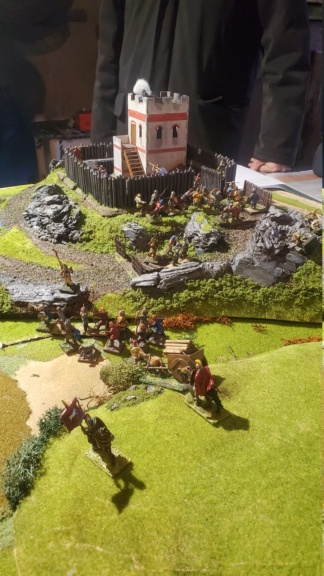 The small vanguard of Tegwen's troop arrives near the Angles... and receive arrows which kill two of his cavalry. Tegwen hesitates. Seeing this, Drustan asks to negociate, he will leave the fort to the Angles if they let him go with his men. Lot of fun as the GM insists that the characters can't speak the same language so the players must use only a few basic words, and gestures, to talk. Aelfric is happy to accept. Drustan and the remains of his troop leave the fort and walk inland, near the forest.

Meanwhile, Marwena (in chainmail, and Gwennin in light blue dress) do not seem interested in the fightings, they have left the main road. 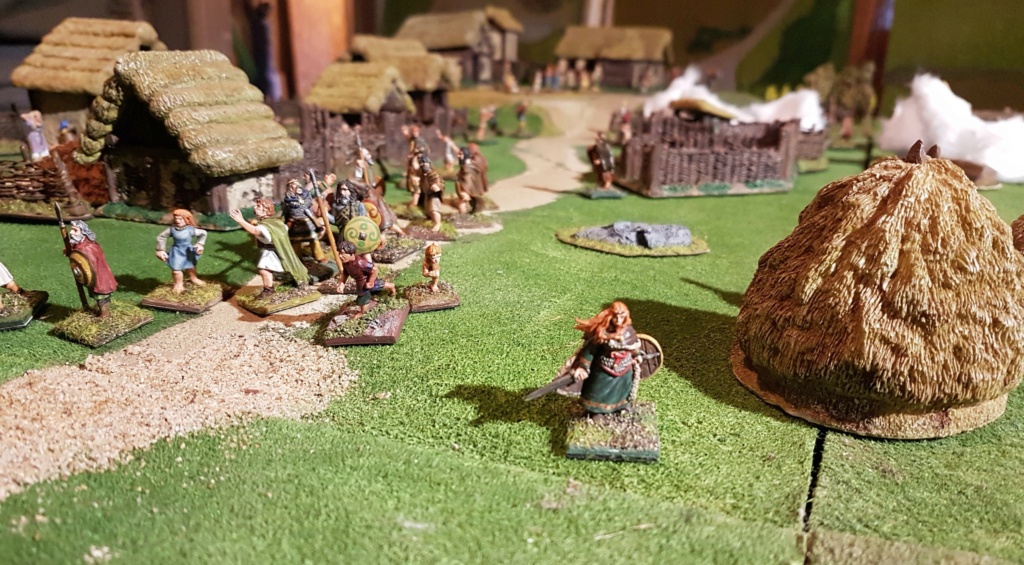 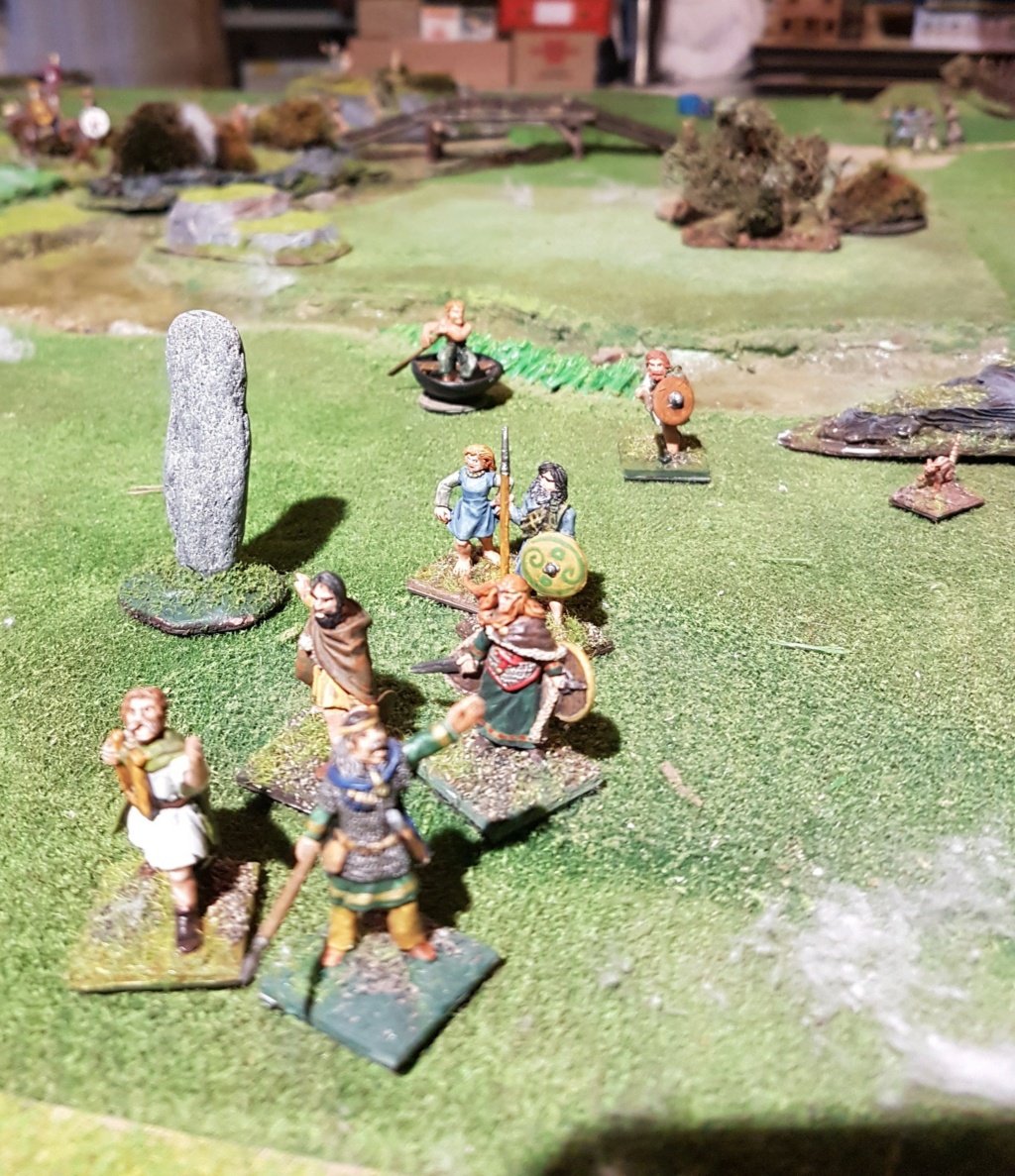 ...and enter the forest. Galanan can see them and would like to ambush them, but he is too busy near the village. 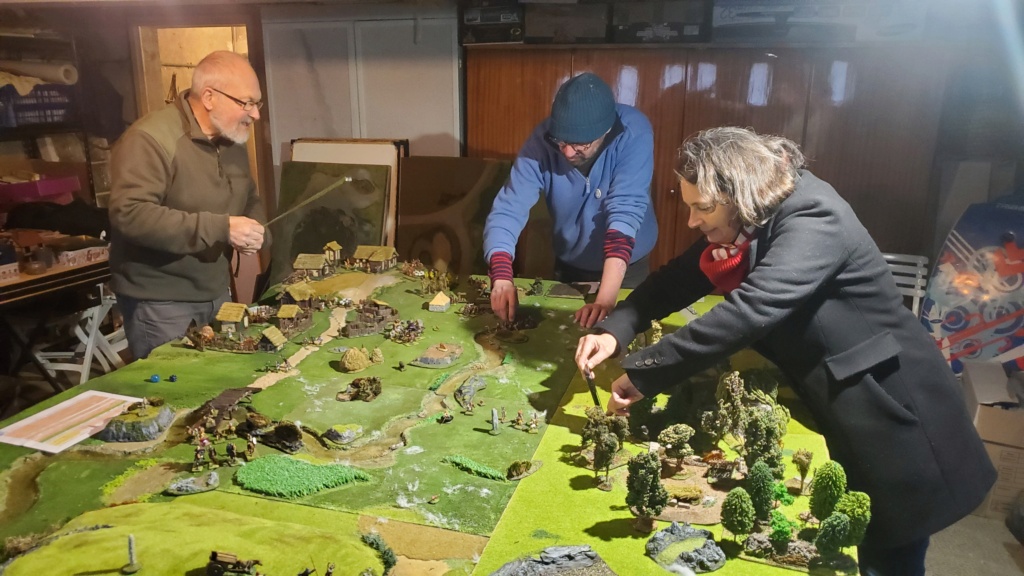 They want to meet an old witch who lives there. After fighting an angry bear roaming there, Marwena meets the witch. 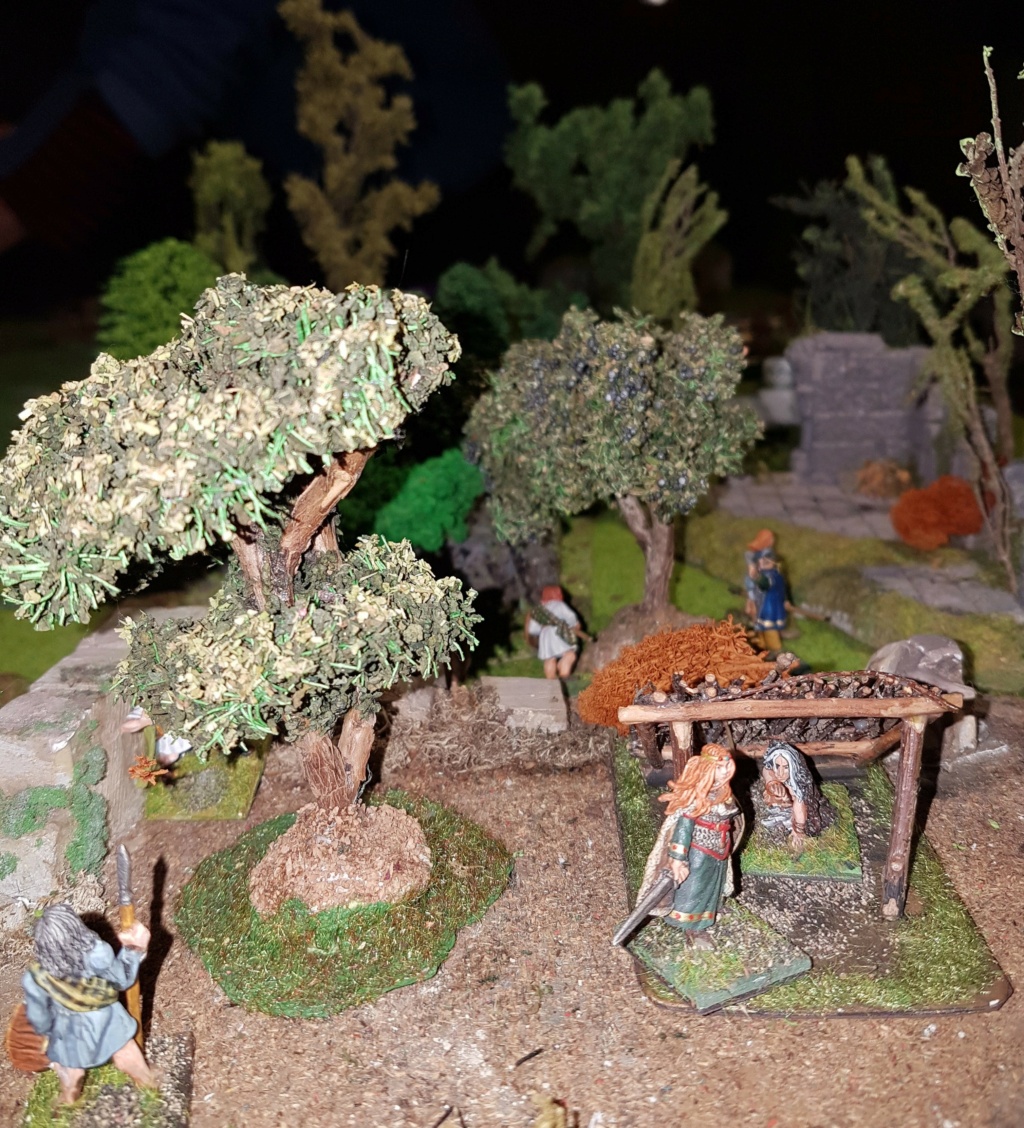 The witch says that Gwennin must rub herself to the three standing stones, as do all women in the area when they want a child. But Gwennin already did such things, before converting to Christianity (in a previous game) it did not work then and she doubts it would work better now.

Drustan, passing near the wood, comes and asks what's going on. Gwennin tells him and asks him if he knows a better remedy than rubbing herself to a stone? Drustan says "Yes!" and is willing to help. It's not exactly what Lady Marwena had intended, but after applying twice the remedy (hence the two red hearts) the smiley die says that everyone is quite happy. 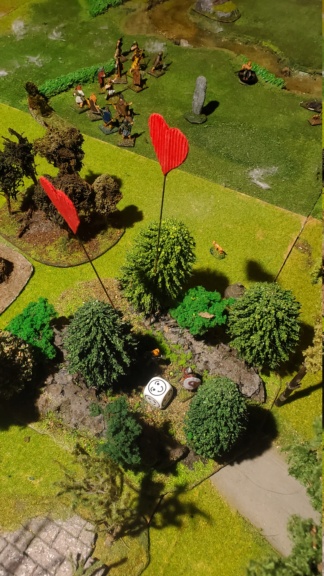 Fightings continue at the stream near the village, with heavy casualties on both of the small troops. 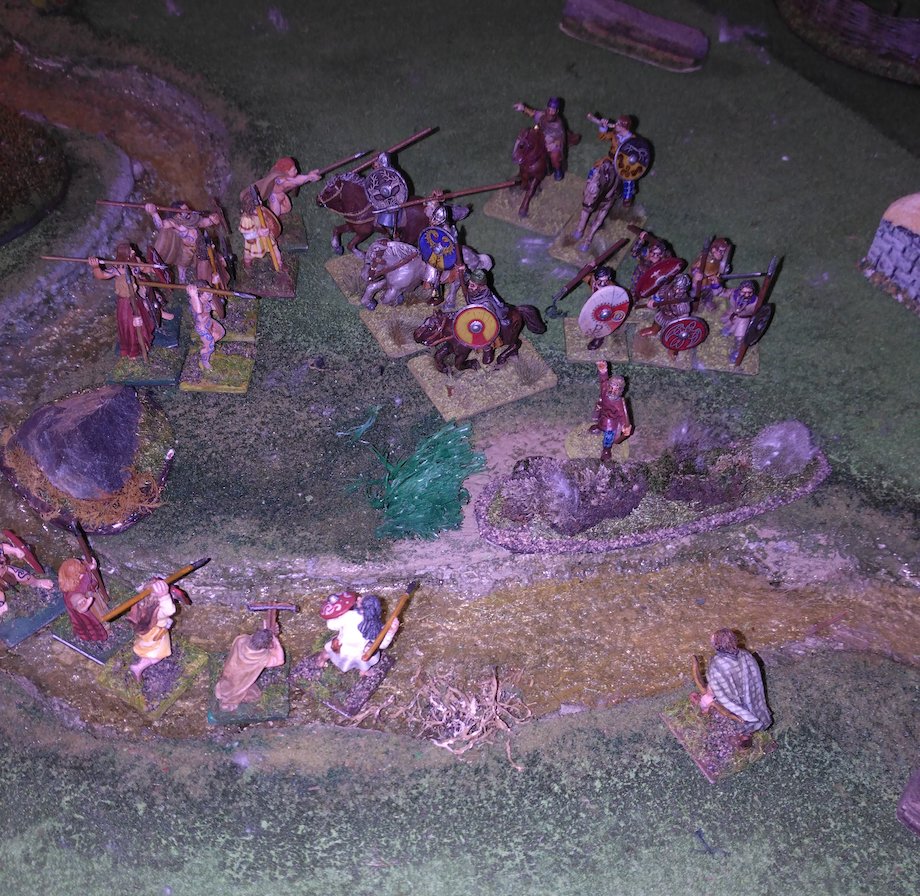 While their foot warriors are fighting there, the mounted Picts have entered the village. Some of them already are near the houses in the background: 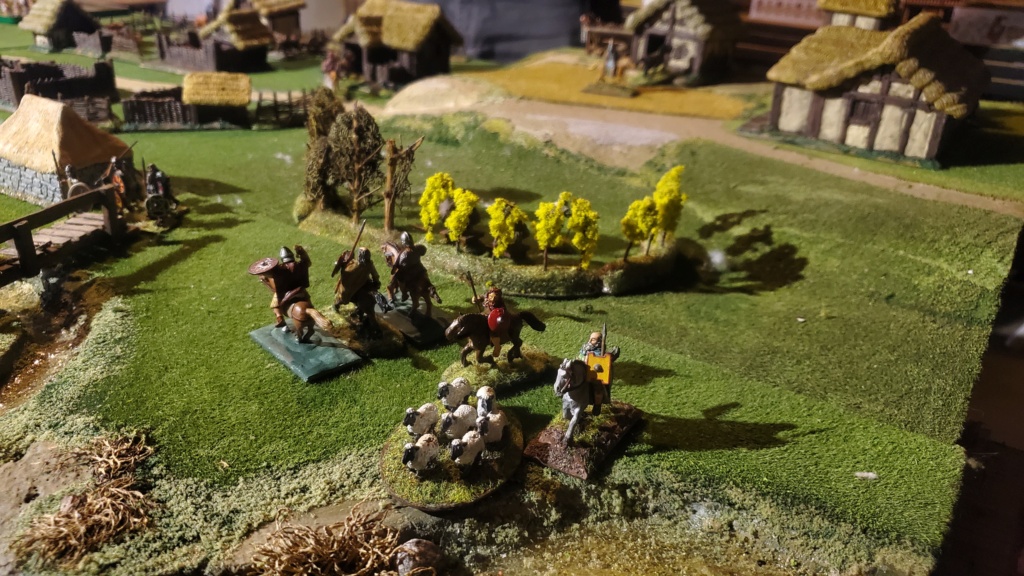 They take some sheep, a few prisoners (four women and a monk) who did not run fast enough, and discover barrels of mead in a house. The warrior who found them fails a test and gets drunk; his friends put the barrels on a cart and him on top. 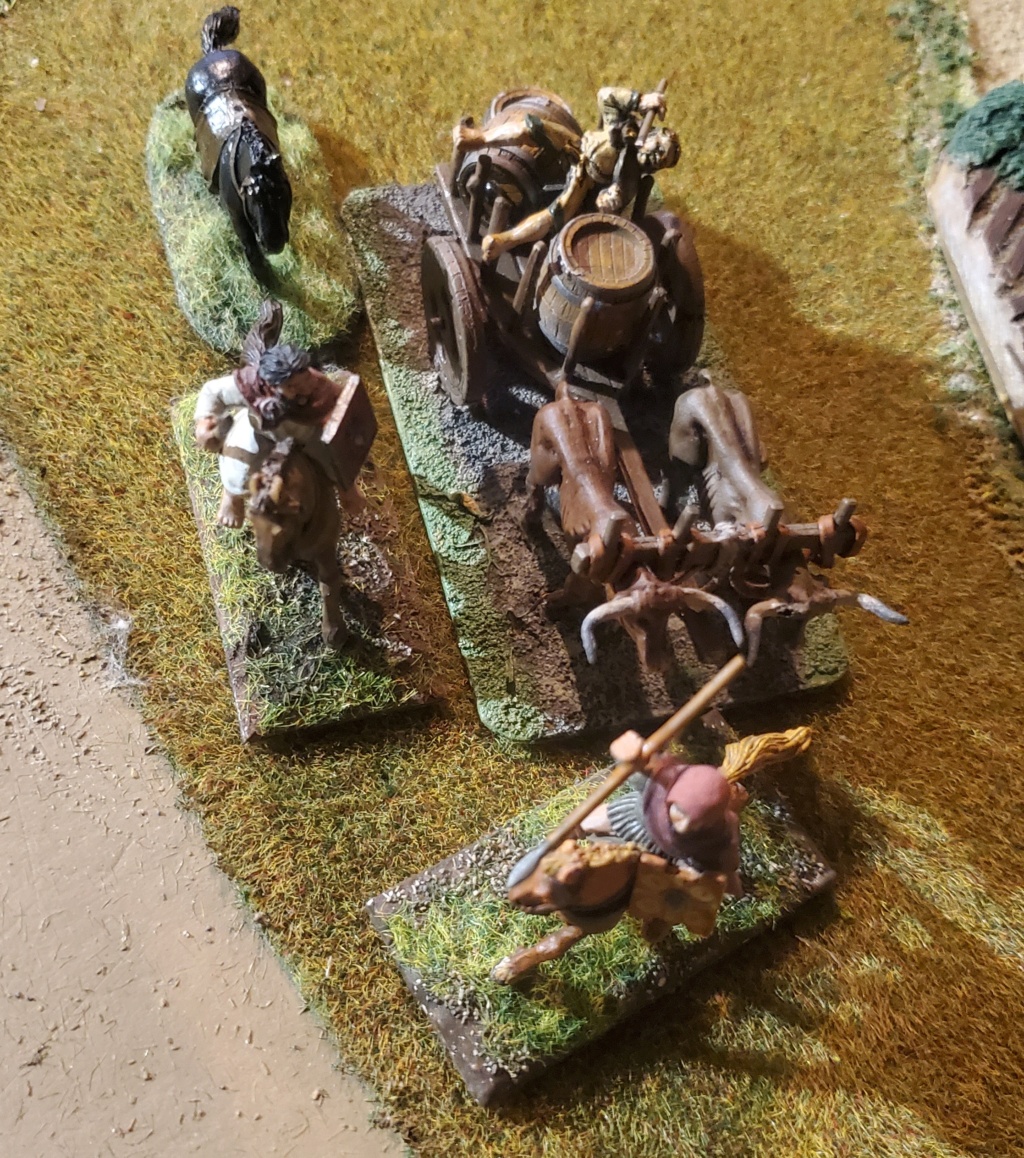 However this cart is too large to cross the small bridge and must be abandoned. Sad about this mead, the two Pictish warriors who have taken the sheep discuss traditional recipes for the fermentation of ram liquor (which a player in a previous games pretended is a renowned local product). 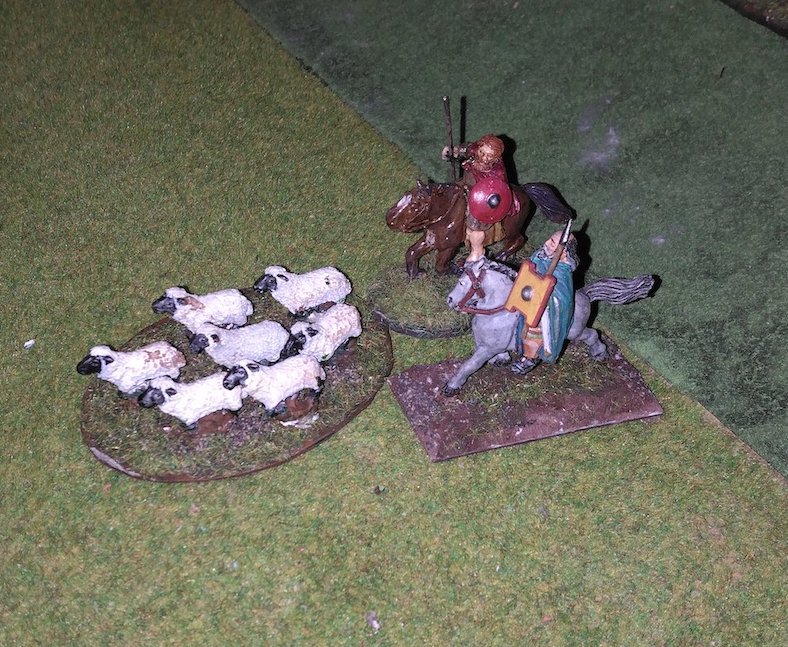 So at the end of the day:

Aelfric and his Angles have the tower. Tegwen negociates with them, pretending to own the village (which is not true, but with the whole country falling apart he sees his interest). He gives them the land between the stream and the forest (which he has no right to, but nobody will challenge it) and himself will run the village. Aelfric pushes his luck and politely asks for more, and as they are supposed not to speak the same language it's good fun again:

Aelfric, pointing at everything he sees in the village: – "Pigs! Pigs!"
Tegwen: — "What? Oh, yes, you can have the pigs."
Aelfric: — "Hens! Hens!"
Tegwen — "Yes, the hens too, if you want them."
Aelfric: — "Wheelbarrow!"
Tegwen: — "You need the wheelbarrow?! Oh, I can see that you are fascinated by this beautiful creation of advanced technology. You can have it, too."
Aelfric: — "Your daughter! Marry!"
Tegwen: — "Uh... You want to marry my daughter...?" (he takes at random one of the female villagers who escaped the Picts, and brings her forward) "Yes, yes, I agree, she is very happy!"

Galanan the Pict has taken some plunder, but with heavy casualties and one casualty was his son. He will continue to oppose Gwennin.

Drustan failed to defend the tower but still has warriors with him and is in good terms with Tegwen, they will certainly cooperate in the area.

Marwena expects that Gwennin will have a child, as they wanted, even if she pretends not to know all details.

That's great! So many competing interests on one table! I'm surprised the GM can keep track of all the machinations.

Ten years is an amazing time to keep something like this going.
Most campaigns I've played in reached a conclusion in a few months or petered out after about a year as people gave up if they thought they were losing, or real world events consumed their attention.

Here's to the next ten years!

Bronshtein wrote:That's great! So many competing interests on one table! I'm surprised the GM can keep track of all the machinations.
Ten years is an amazing time to keep something like this going.

We call it "a campaign" because games follow each other (with very long delays) often with the same characters (or their heirs) but it's perhaps not a campaign in the usual competitive wargaming sense. With many campaign games about other periods too (any new period we begin to play soon becomes a so-called campaign) they are not very intensive.

When AARs have been posted (it's not always the case) the GM can look at them. We don't really mind about the evolution of the broad factions, any group (sub-Roman British, Picts, Angles, Scots...) can expect to bounce again even if severely defeated, with the arrival of new characters. We are more interested in what happens to individual characters, and to their heirs or followers after them. And players do not need to be there for each game, they can reappear later, or be replaced.

With all delays, and the pandemic etc. the previous game in this "campaign" was three years ago! Its AAR explains some of the characters background:
viewtopic.php?f=10&t=55652